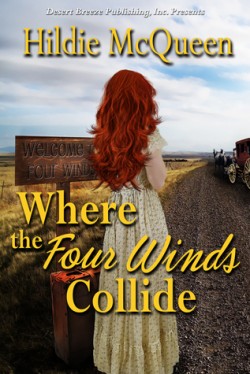 Where the Four Winds Collide
by Hildie McQueen

“Where the Four Winds Collide by Hildie McQueen, has every element I love in a historical romance…” ~Under the Covers

Where the Four Winds Collide by Hildie McQueen is one of the many reasons that I listen to recommendations by my reader and author friends. I inevitably find some obscure or lesser known author that deserve to be seen and heard.

Virginia, 1865: Adeline Buckley has run away from an abusive father and a fiancee who promises to be her worst nightmare. After being beaten by her father, she escapes to the local whorehouse where she is taken in and cared for by those who live and work there. Adeline in return helps out as much as she can by cleaning until it becomes too dangerous for her to be there for fear of discovery.

Four Winds, West Texas: Hardworking rancher, Jackson Pruitt is a lonely man who has seen his partner and friend, Lucas flourish with his wife Peggy Ann. His tinge of jealousy has Jackson knowing he needs a wife. In the meantime, his brother Heath, the local sheriff, had written letters requesting a mail order bride, to little response.

Adeline needs to get far away from Virginia, so the Madame, Mae, puts her on a coach heading to Texas where Adeline has hopes of becoming a teacher or taking care of children . After a few mishaps and a lot of nausea along the way, Adeline ends up on a coach full of would-be mail order brides, heading to Four Winds. When the coach arrives in the Texas town with Adeline still ill from the journey, she winds up married to Jackson Pruitt in the oddest of ceremonies and wakes up on a ranch not knowing how she got there and who brought her.

Jackson had no idea he was coming home with a wife but he would make the best of it. He would allow Adeline to adjust a while before making their marriage a true one, but he had no delusions about love, even if he finds himself attracted to the pretty green eyed, redhead . When Adeline awakens to find she is Jackson’s wife, she is confused and torn between whether she should leave or make a go of the cards she’s been dealt. Jackson is determined to have a marriage and build up his home, but Adeline has secrets and she is hesitant to reveal them. These secrets will be her downfall when her not so distant past eventually catches up to her and rips away any trust that Jackson afforded her.

Well how do I put this? I LOVED his story.  Where the Four Winds Collide by Hildie McQueen, has every element I love in a historical romance, uncertainty, the adventure the mystery. The romance slowly builds here which is exactly how it should. These virtual strangers come together in the oddest of circumstances to make a go of a life together. Jackson from minute one is an honorable man, a bit gruff but lovable all the same. Once Adeline sets her mind to a task, she is no shrinking violet, which makes her a character I totally adore. There are tears and joy and danger all wound into one awesome story. I hope you give this book a try, because you will be glad you did. Now if only Ms. McQueen would hurry on up with her next book, WESTBOUND AWAKENING, because I am not so sure I can wait until October for Captain John McClain and Mae.

Everything you mentioned about this book had me deciding to to run down a copy until I saw that it was only 150 pages for $10. This would barely keep me reading 1/2 a day. Even at $6 for the ecopy, this is more than I’ll pay for a tried and true author that is on my auto buy list. I did put it on my library list just in case.