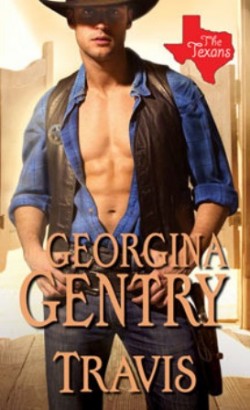 “These are the makings of a great story, and one I definitely recommend.” ~Under the Covers

Texas Ranger, Travis Prescott is in Kansas hunting down an outlaw to drag back to Texas for justice. Instead, the outlaw ends of dead by Travis’s quick shooting arm and Travis ends up with a shattered bullet in his shooting wrist, potentially ending his career as a Ranger. After Travis sees the town doctor who gives him the bad news, he goes, buys himself a bottle of whiskey and continues to drink himself into a mindless stupor that changes his life forever. When he awakens from his drinking binge, he finds himself in the presence of sad looking creatures who are bound to cause him trouble.

Violet LaFarge is a saloon girl intent on escaping life in the saloon owned by Duke, who keeps her destitute and busy seeing to the needs of the saloon. Violet sees her chance at escape one night, but as she is about to take her leave, she stumbles across four orphans in need and pretty immediately take these four on as her responsibility. On a moment’s notice, the almost 20 year old saloon girl transforms herself to a 13 year old innocent by swapping clothing with a passerby and putting her long brown hair into pigtails.

Together, the orphans seek out someone to help them and upon coincidence find a quite inebriated Travis, passed out in the street. When he awakens, he finds himself at the mercy of the five orphans who have basically ambushed him into eating his food and stealing his dog, who immediately latches itself onto the smallest of the orphans, Boo Hoo, who constantly cries, until she meets the pooch. The ragtag crew of misfit orphans guilts Travis into taking them along on his journey and they end up in Pleasant Valley, Texas and quickly become a family of sorts.

Only problem is, Violet is falling in love with Travis, who thinks she’s an innocent 13 year old, and now that she’s told the lie, she’s hard pressed to come clean. even though every single female in Pleasant Valley want to put their hooks into Travis. You see, Travis has a big issue with lying females since his fiancee, Emily left him for none other than Violet’s deviant boss, Duke. How can Violet fess up when it will ruin her chances with Travis anyway and take her new family away from her?

This dilemma follows Violet through weeks of playing the child, even though she is also taking charge of the household and the children. Travis is not immune to Violet, he is attracted to her as well, but every single time he realizes she’s only 13, he practically castigates himself. When one wealthy widow sets her cap on Travis she goes after him with a vengeance, bringing out the worst in Violet, whose jealousy is slowly building up and is bound to explode soon.

Travis ~ The Texan~ by Georgina Gentry, is the first of her books I have read. I enjoyed the storyline immensely and so enjoyed the interaction between the characters, as the uniting of all these different beings was such a perfect ensemble. Travis is the defeated Texas Ranger who so desperately wants his life as Ranger back, but can no longer see his life without the orphans. Violet knew no other life than the one she had in the saloon. The degradation of being forced to become a whore made her more determined to start new and never have anyone know about the tainted life she led. These are the makings of a great story, and one I definitely recommend.

Thanks or the review Kimberly. I love cowboys. I need to start this series.