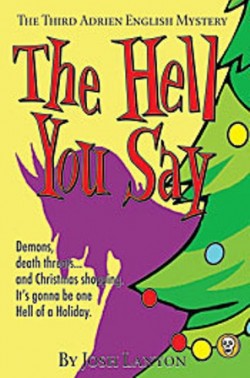 The Hell You Say
by Josh Lanyon

Right up until the very end, Lanyon is weaving readers through a maze that is filled with surprises and twists. ~ Under the Covers

THE HELL YOU SAY is the third book in the Adrien English series and WHAT IS GOING ON HERE? Where this book left off made me want to jump right into the next one. There is some serious strain now on Adrien and Jake’s relationship and it had me glued to the pages.  I just had to know what was going to happen to them, even though I knew it was something terrible. What a way to keep me on edge!

Lanyon is such a talented writer. Hands down the best thing about this book is Adrien’s narration. I just LOVE being inside his head. I love the sarcastic quips and the dry humor. I just wish Adrien was just as ready to pursue Jake and give him that slap in the head he so desperately needs as he is when jumping into dangerous situations.

On the flipside, as I was reading this book, all I could think of was, “Jake Jake Jake. What is Jake thinking right now?” As a result, the mystery took a side stance just because the romance was starting to unravel. I knew this was coming, but it’s not fun to read. Things were just getting themselves figured out and them, BOOM! Complications arise that totally stir things up. I am dying to know what happens next!

I would love to have a book from Jake’s POV from all this. Or even a single crucial scene. Jake is so misunderstood and I think readers can get frustrated by both his actions and non-actions. I definitely want to get to know him more on a deeper level. See what’s going on in that head of his. It would be so interesting!

As I mentioned, the mystery is solid in this book, but it was just overshadowed by the other things that were going on in this book. Though, that is not to say that it doesn’t shine. Right up until the very end, Lanyon is weaving readers through a maze that is filled with surprises and twists.

Alongside the mystery, there are also several updates on both Adrien and Jake’s life. New additions are making their way into both character’s lives and I don’t think they knew how to handle it. Needless to say, this book will have you reaching for the next in the series. It’s so addicting!

Great review, Annie!! And ITA re: getting something from Jake’s POV ~ that would be wonderful!!

Under the Covers Book Blog
Admin
Reply to  Leigh

Thanks Leigh, as you know, I’m addicted to this series!!

Thanks Francesca. I love Josh’s books.

Thanks Ann…like the sound of this!

I loved this series! And yes, I would love to have had Jakes POV. Thanks for another great reveiw. I might have go re-read this series for the the third time!!!! Lol!!!