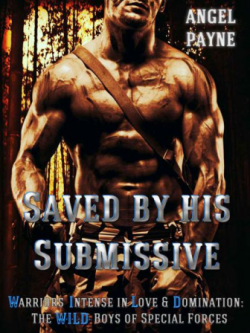 Saved By His Submissive
by Angel Payne

“All in all, this is an awesome new series, with a nice blend of suspense and D/s.” ~Under the Covers

Saved by his Submissive is my first read by Angel Payne and the first book in her new series, The WILD Boys of Special Forces.  Garrett Hawkins has suffered each and every day since learning that his finance was killed with her medical unit a year ago.  He’s a tough, alpha Special Forces operative with a very dominant streak.  When he and his crew are called to rescue female victims of human trafficking, he gets the surprise of his life.   His beloved Sage is among the rescued.  It’s all he could have ever hoped for…but Garrett knows that he can’t hide his darker sexual side for long.  He’s a sexual Dominant and desires nothing more than to claim Sage as his submissive, but he fears how she would handle his need to master her completely.  Sage wants nothing more than to live her happily ever after with Garrett.   It’s up to her to convince him that she’s up for the challenge.

First off…..that’s one HOT cover!  Now on to the story….I love how Angel Payne was able to get such depth of emotion from her characters.  Garrett has such a tough guy exterior, but is emotionally on the brink at the beginning of this book.  We get to see how he transforms from a man lost at sea, to found but uncertain of his direction, to confident Dominant with the woman of his dreams.   Sage is a strong woman, both internally and externally.  She’s knows she can give Garrett what he wants and needs.    I wanted to knock some sense into Garrett a few times!  It takes some soul searching and intervention to get him to man up.  There is lots of action, which I loved and an AWESOME scene where the tables are turned on the captors.   Garrett and Sage have seriously explosive chemistry…he hits all the right buttons for me by being a stern, but loving Dom.  He’s not the cool, detached sort.  Thank God. The BDSM isn’t hardcore, but the D/s dynamic is explored very nicely in the context of a loving, established relationship.  It’s nice to see how a couple can grow like into their roles like this.  The characters go through hell, but it isn’t overly dark either, which I really appreciated.   I’m looking forward to meeting all of the men of Garrett’s unit, and Zeke seems to be on deck to have his story told.  All in all, this is an awesome new series, with a nice blend of suspense and D/s.

I like when a dominant hero isn’t detached too. Sounds like a good read. Thanks for sharing!

Hope you like the book, Sophia! Let me know what you think. 🙂

What an awesome review! I thoroughly enjoyed the story. Zeke and Rayna will be out this summer!!!!

This is a great read! Loved it!

I love the cover, book sounds good too!

Hope you enjoy it, Timitra! And I’ll relay your sweet words about the cover to my artist. She worked VERY hard on it.