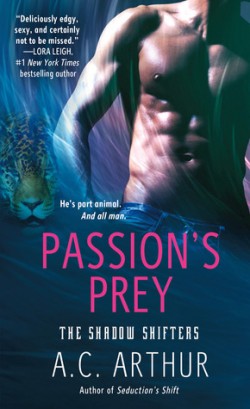 “If you’re in the mood for some hot shifters who can kick ass, pick up this series, just make sure it’s in order.” ~Under the Covers

Passion’s Prey is the third installment in The Shadow Shifters series and while I found myself very interested in the world that Ms. Arthur created, I felt a bit lost.  But of course that is my fault, because I haven’t read the first two in this series.  So before you even pick this up, I recommend you read this series in order so this world can flow the way it should.

Although I was lost, I enjoyed this world.  These shadow shifters are half human and half cat species. They range from Tigers to cheetahs and they are quite powerful and beautiful.  They’re pretty much shape shifters and they live in our world to protect not only their own species but the humans as well from the Rogues that have separated from their tribe.

In Passion’s Prey the story of X and Caprise is very full of…. well….. Passion.  These two are stubborn, hard and strong willed and when they collide it’s not sparks, It’s fireworks!

X is an FBI agent and his latest job is to watch over Caprise who’s life is in danger.  And while X is comfortable in his Shadow shifter skin, Caprise is not and she does everything she can to deny her fate and live like a human. So when X finds her stripping at a local strip club he can’t help but want to take her away from it all.  He’s just not sure if it’s because he wants to save her or screw the crap out of her.  What makes it even worse?  Caprise is the sister of X’s best friend.  But that sure doesn’t stop them from getting it on all over the place!

Caprise and X seem to share similar dark pasts and man is it heavy.  Their stories will at least have you raising your eyebrows in utter disgust and shock.  It’s not your typical girl saves guy or guy saves girl, these two save each other which puts them on even ground.  They end up having mutual respect for one another and that makes their relationship strong.

Besides all that, Passion’s Prey is a great world that is involved with the FBI and all that good stuff.  These shifters are in this world of ours and we don ‘t even know it. They’re kick ass no nonsense guys so if you’re in the mood for some hot shifters who can kick ass, pick up this series, just make sure it’s in order.

Artist C. Arthur was born and raised in Baltimore, Maryland where she currently resides with her husband and three children. An active imagination and a love for reading encouraged her to begin writing in high school and she hasn’t stopped since.

Working in the legal field for almost thirteen years now she’s seen lots of horrific things and longs for the safe haven reading a romance novel brings. Her debut novel Object of His Desire was written when a picture of an Italian villa sparked the idea of an African-American/Italian hero. Determined to bring a new edge to romance, she continues to develop intriguing plots, sensual love scenes, racy characters and fresh dialogue—thus keeping the readers on their toes!

During the course of her writing career Artist has won the YOUnity Guild’s Best New Drama and Romance Author Award in 2005/06; been nominated 3 years straight for EMMA Awards, with the fourth time being a charm she took home the 2007 EMMA Award for Favorite Romantic Suspense; and has also received her first Romantic Times Reviewers’ Choice Award Nomination for Best African American Romance. She is represented by Christine Witthohn at Book Cents Literary Agency, LLC.

Thanks for the review Jessica.

Thanks for the review. I’m going to check this series out.

Thanks for the review Jessica!