Join our newsletter to be the first to hear our latest news! Learn More
Home / Reviews / Review: Jake by R.C. Ryan 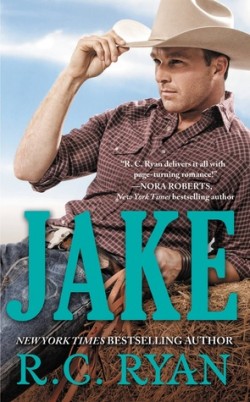 “I quite enjoyed this third book in R.C. Ryan’s Wyoming Sky Series….A nice message comes through.” ~Under the Covers

Drop dead gorgeous, country Veterinarian, Jake Conway has no issues with women. This youngest brother of three knows how to pour on the charm for quick results, but when he meets hot redheaded, high powered, city attorney, Meg Stanford, all bets are off and Jake begins to realize that this contradiction of a woman is getting under his skin.

Meg Stanford hasn’t been back to Paintbrush, Wyoming since the day her mother took her and left her Dad, Rancher, Porter Stanford and never looked back, when she was 10. Meg grew up resenting her father, thinking that once she was gone from the ranch, she was no longer important to him. Now Porter has passed away and Meg has returned to settle his affairs which include the shocker that she has a young half brother.

Seven year old, Cory Stanford has been through so much in his short life. The untimely death of his young mother, death of his father and now meeting a sister who holds his life in the balance, have this young boy running scared.

Jake is summoned to the Stanford ranch to treat Cory’s injured horse where he meets his neighbors for the first time since the Stanfords pretty much kept to themselves. He finds Corey an amiable but lost boy and his sister so confused about how to deal with it all. Meg is used to the fast life in Washington DC, where she is a successful trial attorney and when she meets Cory she has no idea how to get through to the boy she didn’t even know existed. Jake knows somehow he’s going to have Meg and that swagger of his totally has her thinking.

After a vandalism incident on the Stanford ranch Meg realizes that her easy in and out are not as easy as she had predicted. In addition, she didn’t realize how much she missed the ranch, life there, and Jake could be the biggest reason she may be changing her tune about the going back to the fast paced lifestyle she once led.

Jake Conway has been relationship resistant, especially after seeing his older brothers fall hard for their wives, could this redhead be the answer to his resistance? Will Meg put aside her animosity towards her father and become real family to Cory? All is answered in JAKE by R.C. RYAN.

I quite enjoyed this third book in R.C. Ryan’s Wyoming Sky Series. Jake runs the gamut of emotions between the goings on with both the Conway clan and the Stanford siblings and everyone else in between. A nice message comes through that proves that just because you are not blood doesn’t mean you won’t be cared for, and success in the business world does not necessarily make one happy in their private lives. I hope you will give R.C. Ryan’s JAKE a go. You will be happy you did!

I love this series Thanks for the review Kimberly.