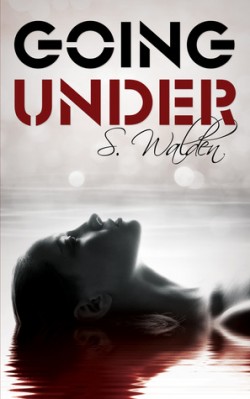 Going Under
by S. Walden

“It’s dark, frightening, painful, controversial, sad and while it’s all those it’s also funny and enlightening.” ~Under the Covers

This is not an easy book due to the subject matter of rape and suicide. It’s dark, frightening, painful, controversial, sad and while it’s all those it’s also funny and enlightening. You may think why is it funny if it has to deal with rape and suicide? While the story evolves around those topics, it’s not all morose. There are some hilarious, sweet and tender parts to the story. It’s a tough subject that I think the author did a terrific job with it being well written and also with the characters that make you laugh with their thinking and bantering. It may trigger some memories for those who suffered thru rape, the consequences of it or know of anyone who went thru it. It’s nothing too graphic but you know what is going on and what’s happening.

Story starts with Brooke who is attending her best friends funeral. She feels guilt for how she betrayed her best friend and not making amends before her untimely death. At the funeral she bumps into a dark haired, blue eyed boy named Ryan. She’s instantly attracted to him and her mind goes wandering in the sexual way. She hates herself for thinking this of all places at her friends funeral and is angrier at herself. Brooke knows what happened to her friend Beth and with this she plans her vengeance on the boy(s) who caused her suicide. She has decided to attend the same school her friend Beth did to see her plans go to fruition. Except she doesn’t really know what she’s getting into. Brooke gets help along the way from her coworker Terry, her good friend Gretchen (who is hilarious) and Lucy whose story is emotional, horrible and heartbreaking. Brooke also forms a relationship with Ryan. He is one character that I absolutely adored, flaws and all. Their video game scene was very hot and sensual.

What drew me in more into the story is the emotions Brooke went thru. She has the guilt of not being there when she was most needed, the fear of not being there to help the other girls, the love she has for Ryan, the connection she has with her father and…well, I’m not spoiling that for you. At first I didn’t like Brooke. I found her selfish and bratty but as the story progresses she matured and we get how funny, sassy, short tempered she can be. The bantering between her and Gretchen had me laughing out loud, when she’s remembering her past with Beth broke my heart, the moments she has with her father brought a smile to my face and the pain she feels, I felt as well. I connected with her.

The last three chapters of the book are very difficult and brutal. There’s a twist in the story that I didn’t see coming and was surprised the author went there. I even had anxiety, heart palpitations and there were plenty moments of holy sh*ts flying around. After all is said and done nobody leaves unscathed.

The epilogue felt rushed and while it was sweet, I wanted way more. Much much more.

All characters, good and horribly bad make this story realistic. It could happen and probably is happening to someone you know. At the end of the book there is a message from the author. Read it. It can always help.

Secrets are revealed, the truth is ugly and justice is served.

Hm,book that sounds that is totally different in today’s books, sounds like a very good book with totally unique concept.

Thanks for the recommendation and amazing review 🙂