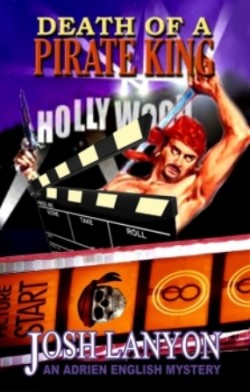 Death of a Pirate King
by Josh Lanyon

Jake Riordan is so damn mysterious that in a way, he’s just another one of the mysteries that Adrien is trying to figure out. ~ Under the Covers

It’s been two years since the events of THE HELL YOU SAY and Adrien and Jake have been living their own lives separately. Jake has received a promotion and is now married to his policewoman wife, Kate while Adrien is steadily seeing Guy Snowden. They are brought together once again when Adrien’s book, Murder Will Write is optioned for a film by a Hollywood actor named Paul Kane and a murder happens. Police suspect various people and Adrien is once again caught in the midst it all.

I don’t think I could ever get tired of these books. Adrien English is a character that you don’t see often. He is so multi-facted and three-dimensional that he almost feels real. He has his vulnerabilities – his inability to open up to a relationship and his heart problem, but he is also courageous, stubborn and determined to a fault. The guy is just so damn likeable and being in his head is always a fun experience from beginning to end. I love the dry sense of humor he has. It fits so well with the tense action scenes and lightens up the mood when needed. He’s just magnetic – he reels you in and there’s no other place better to be!

If you made it this far into this series, then you may have experienced a love/hate relationship with Jake Riordan. Let’s face it – the guy can be a total penis head. But I love him and I know you secretly do too since you’ve continued this series. There’s just something about him that is mysteriously alluring. We hear about his extracurricular activities and you want to know more about him. You see his reactions to certain things Adrien says and you can’t help but wonder what he is thinking about. All this, is what makes me love him. He’s so damn mysterious that in a way, he’s just another one of the mysteries that Adrien is trying to figure out.

Jake and Adrien have been through so much already. Them being together is probably the toughest thing to achieve because of Jake’s job and his personal life. However, Jake makes some pretty big leaps in this book that I’m really proud of. He really puts himself out there and Adrien doesn’t make it easy for him. He walks away and that gutted me. However, Jake’s gesture says it all. He makes a decision at the end of this book that will catapult the next and final book in the series and I CANNOT WAIT FOR THIS!!!

I’m sad that this series is almost over. I think I could have read about them forever. The Adrien English series is a definite must-read for M/M fans. It really has it all. Do not miss out on it!