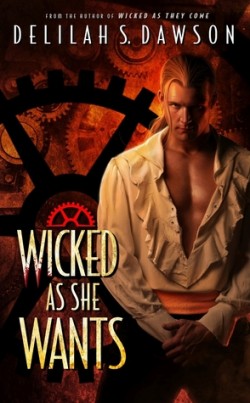 Wicked as She Wants
by Delilah S. Dawson

“If you are not reading the Blud series, you are missing out!  This is a series I would recommend to anyone and everyone that will sit still long enough for me to tell them all the crazy things they can come to expect.” ~Under the Covers

I remember it was a time much like this last year when I first picked up WICKED AS THEY COME.  It was a debut novel and I had gotten an ARC and had left it sitting around.  I’m not going to lie, it was because the guy wearing the top hat in the cover scared me a bit.  Then I finished reading it and went to the RT convention and that book was the topic of more conversations I had with my friends that any other!

Delilah S. Dawson has created one of the most original and refreshing worlds in a time when I thought it had all been done before and nothing could shake me up.  Much like Jeaniene Frost did with her Night Huntress series, Ms. Dawson defies genres and can’t be pinned down to one.  Yes, this is steampunk, but not only that.  And yes, there are blood suckers and all kinds of scary creatures.  But along with the scary, the original and the amazing stories, these books are also sexy romances!  They have it all!

If you are not reading the Blud series, you are missing out!  This is a series I would recommend to anyone and everyone that will sit still long enough for me to tell them all the crazy things they can come to expect.

But I’ve strayed long enough, let me tell you about WICKED AS SHE WANTS.  We met Casper, the hero, in the first book.  He was kind of, sort of, the other guy for the heroine.  But never one convincing enough that you would root for her to end up with him.

Ms. Dawson has taken him on quite a character evolution throughout the series.  Every book we’ve seen him in has shown a different side to him, and WICKED AS SHE WANTS shows even more depth.  And I wanted to eat him up!  Casper is such an addicting, conflicting and just amazing character.  I am staking my claim, I wantsssssss him!

But not only is Casper amazing, Ahnastasia was not what I expected for him to be paired up with.  She’s a strong heroine, a little blud thirsty, a leader in her own way but she was also able to show some vulnerability.  I think this was a perfect pair!

I only missed the traveling circus of the first book a bit, but we still got plenty of strange places, such as the brothel airship.  The story of Casper helping Ahnastasia to regain her throne was full of twists and turns.  Some blud, some action and some smex!  I couldn’t have been happier.

The only thing I regret?  Finishing the book!  I don’t want to wait another year to be back in this amazing place.  Please write faster!

Delilah S. Dawson comes from a long line of Roswell, GA natives. WICKED AS THEY COME is the first in her Blud series for Pocket/S&S, and a creepy paranormal YA, SERVANTS OF THE STORM, will be out with Simon Pulse in 2014. Her next YA, DELINQUENT, will be out in 2015. She is also an Associate Editor at www.CoolMomPicks.com and www.CoolMomTech.com, where she is given the more eccentric and geeky products to cover. Delilah lives with her husband, two small children, a horse, a dog, and two cats in Atlanta.

i’ve got the first in this series on my tbr pile and can’t wait to read it…now I’m looking forward to reading book 2 thanks to your great review Francesca!

I loved the first one it was really well written and the story is fresh and new, I cant wait till this one comes out and the story continues there was just so many questions that left me wanting a bit more

Best of 2013: Francesca and Annie’s Picks! | Under the Covers Book Blog