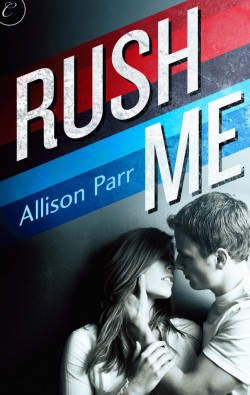 Rush Me
by Allison Parr

Ryan comes off as a little egotistical but Rachael also seemed to cross the line a few times. In the end, this one didn’t work for me and therefore, I can’t recommend. ~ Under the Covers

RUSH ME is Carina Press’s first foray in New Adult so naturally I had to try it out. I’ve been in the NA mood for awhile now and have been gobbling them up like candy. RUSH ME seemed to fit the kind of books I liked so I gave it a shot.

In this book, we have a hero that is a pro athlete named Ryan Carter. A hot football player? Yes, yes count me in! Our heroine is Rachael Hamilton, a bookish girl who is still trying to figure out how to live her life while also pleasing her family. Ryan and Rachael meet at a party and well, I can’t say that this scene really hit it off for me. Ryan is being serviced by a groupie and for me, that changed how I saw him immediately. Ryan comes off as a little egotistical but Rachael also seemed to cross the line a few times. I just could not really understand her reasoning  for some of her actions and words. Sometimes I wanted to stop her from doing/saying things while others I wanted her to DO SOMETHING when she remained inactive. As a result, I just couldn’t get into the romance at all. As individual characters, there were too many things that bothered me for me to even care if they got their HEA in the end.

One upside is that I did enjoy Parr’s writing even though I didn’t enjoy being in Rachael’s head. So I can’t say it worked for me entirely. The New Adult genre has some really great books out there but I am finding it hard to understand what constitutes as NA now. The hero in this book seemed a little older than I would thought would be considered as NA. In the end, this one didn’t work for me and therefore, I can’t recommend.

I’m a twenty-something nomadic writer. I’m a chocolate lover. I’m now a coffee lover, too, though I avoided drinking it for twenty-two years (I caved while bartending late nights in Paris).

I grew up in New England and I have an incurable case of wanderlust.

Sometimes I am such a city person that I can’t imagine living somewhere that doesn’t have an affectionate name for its subway system, while other months I end up in villages so small there isn’t even mail delivery, and going to the post office is a social occasion.