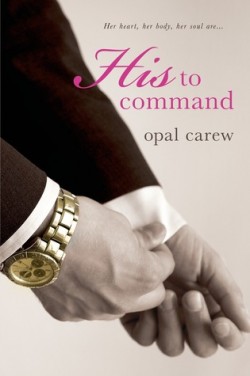 His to Command
by Opal Carew

“I was completely entranced about how the characters dealt with their past and their present relationship.” ~Under the Covers

Kate is a professional business woman. She moved to a different place to start her life over. She is also looking for an investor for her company so that she can buy her partner out. She never thought that her past would come back to haunt her. She also never thought that she would still have feelings for the one man who broke her heart.

The first part of the book was more about Kate trying to avoid Matt. She did not want anything to do with him. She just wanted to forget her time with him. She felt that she did not need another broken heart. Matt just wanted to know what actually happened between them. So he tried to hunt her down. Kate did her hardest to hide from him. But in the end he caught up with her. And told her he would not let her go until he found out what happened between them.

Since Matt finally got Kate to sit down with him and talk; he suggested something to help her find her new Dominant. He offered to teach her everything she needed to know to serve, and at the end of their time together they would both go their separate ways. With that agreement they both tried to keep their feelings from each other. But as the days progressed, Matt tried to stay in Dominant mode and Kate tried to stay in submissive mode, their feelings for each other surfaced once again. They both tried to ignore it but in the end their feelings were stronger than their wills.

This book gave different aspects all in one book. It gave the Dominant/submissive angle and it also gave a real relationship angle. I was completely entranced about how the characters dealt with their past and their present relationship. By reading this book, the past always comes back to the present. Even if a relationship ends, there is no telling if the people in that relationship will ever run into another again and still have those same feelings for each other.

I have always loved reading books from this author. She has a way of making her female characters down to earth and with backbones. She also has a way of making her male characters extremely hot and makes you with you had him in your life instead of in a book. I actually think that this book became my favorite of all of her books. I cannot wait for another book by this author to come out. I am counting the months until then.

Thanks for the review Margaret!