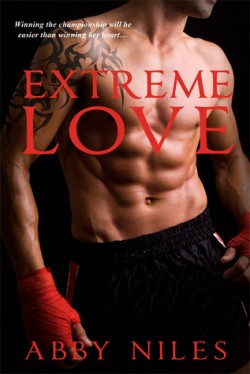 This book didn’t work for me. Apart from Dante, who really is a decent character, the book felt flat. Therefore, I can’t recommend and would pass this up.  ~ Under the Covers

There were two reasons why I picked up this book:

Unfortunately for me, that’s where my love for the book started and ended.

Caitlyn Moore believes herself to be fat. She doesn’t have a healthy self image and it is very, very prominent in this book. She is so insecure about herself that it’s a downer and instead of making me connect with her, it only infuriated me. All she thinks about is her weight, weight, weight, which in turn causes her to worry, worry, worry.

When Dante Jones, a hot MMA fighter expresses some interests in her, she completely shuts him down. And when he persists, she does it again and again. All her moaning about being not good enough for Dante because of her distorted body image was so persistent that I ended up believing that about Cait. She doesn’t deserve Dante. Dante is a really nice guy and he genuinely wanted to be with her but because of her attitude and her hang ups, Cait doesn’t see that.

Another thing that bothered me were the side characters. I found them to be annoying and quite frankly, they were all jerks. As the story went on, I felt less and less inclined to read.

This book didn’t work for me. Apart from Dante, who really is a decent character, the book felt flat. Therefore, I can’t recommend and would pass this up.

Ever since Abby Niles picked up her first Sweet Valley High book in sixth grade and fell in love with Elizabeth and Todd, she’s been hooked on romance. By the time she reached high school, she was devouring meatier romances with pirates, cowboys and knights. She never imagined that those years of reading would one day lead to her becoming a published author.

In her late twenties, after having twins and becoming a stay-at-home mom, she started doodling stories to keep her sanity. Next thing she knew, she was actually submitting to publishing houses. And was immediately rejected. That didn’t stop her though. She found some kickass critique partners, honed her craft, and continued submitting.

Today, she juggles work, being a single mom, and writing. It’s not always easy, but hey, who said life was easy?

She is represented by Maureen Walters at Curtis Brown, LTD.

Thanks Ann! I was thinking about getting this…

I’m glad I didn’t get this one. Thanks for the warning. I would have bitch slapped her and then deleted it from my Kindle.

Thanks for the recommendation.