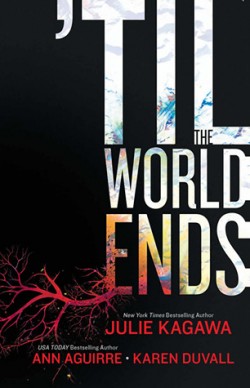 These three stories pushed me out of my comfort zone, keeping me on the edge of my feet and riveted to the pages. Though all quick reads, they each pack a serious punch!  ~ Under the Covers

DAWN OF EDEN is the prequel to Julie Kagawa’s Blood of Eden series. It follows Kylie, a twenty-three year old doctor in the middle of the Red Lung plague. People are dropping like flies and it’s almost scary the amount of detail that Kagawa gives readers. The premise of this story is summed up with these words: What if life as you knew it was ending all around you? Where would you go, who would you want by your side?

The words are so poignant, so haunting and thought-provoking that I have no question this story will appeal to the masses. Kagawa’s writing snatches readers in by the collars of their shirts and keeps you riveted until the last page. Though do not read this story at 2AM in the morning because the imagery is so strong and vivid that it gave me the creeps! But that is a testament to the author’s writing. Kagawa is able to take readers on an emotional ride. Though unforgiving in its graphic detail and heartbreak, there are also tender moments of fleeting happiness that make this story worth the read.

Since Kylie and Ben are an older couple, there is sex so again, this is why I think this series will appeal not just to the Young Adult readers, but to various ages as well. What Kagawa writes about is more than just the typical vampire story. It’s about survival, loss and family. Things that I think anyone can relate to.

THISTLE & THORNE is the second story in the anthology and phew! It’s another one that packs a punch! After a spill that has turned everything to a wasteland, corporations have now moved people who can afford it into protected communities. However, that leaves everyone else you can’t on the outside.

Mari Thistle is such a strong and unique character. I found myself immediately drawn to her strength and courage. She has responsibilities that weigh down on her but they don’t dampen her spirits.

I thought Thorne was a great character. Both mysterious yet intriguing, he provided Mari with someone who could work with her and the twists and turns along the way made for a very easy read.

Ann Aguirre is such a talented writer. My favorite thing about this story is the world. The worldbuilding is phenomenal and incomparable. Nothing limits Aguirre’s imagination and her attention to detail makes everything she writes a must-read.

This is my first story ever written by Karen Duvall and I have to say that I really enjoyed it! All the stories so far have been engaging and thrilling, but SUN STORM’s premise was the more intriguing for me as a reader.

Sarah Daggot has a unique ability. After a solar flare nearly destroys the planet, Sarah becomes Kinetic so she is able to sense the oncoming of storms. How original and interesting is that!?

Karen’s writing for me was enjoyable. I like authors who are able to take a unique idea and really make it their own. Though I wished for a little more character development, out of the three stories I found Sarah’s character to be the most interesting. I just wished there was more of her to see.

Overall, these three stories pushed me out of my comfort zone, keeping me on the edge of my feet and riveted to the pages. Though all quick reads, they each pack a serious punch!

Thanks Ann for the review.