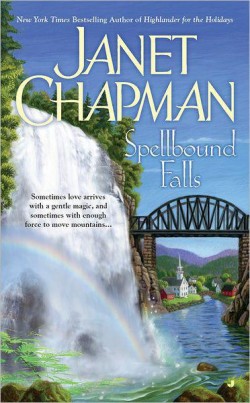 Spellbound Falls, one word best describes this book; sweet. So sweet I now need to plan a trip to the dentist, but the trip will be worth it. ~ Under the Covers

Maximilian Oceanus has come to Spellbound Falls to spend time with Henry, the six year old son he never knew he had but already loves. Luckily he comes in time to save Olivia Baldwin, the manager of the camp they are staying in, from being attacked by a frisky employee. From the start Olivia is attracted to his strength but after a lifetime of being abandoned by those who should love her she is determined not to fall for him. But with a matchmaking six year old plotting to get them together and the undeniable chemistry will she be able to resist his magical charm for long?

I seem to be reading this series backward, I have already read one of the future books, but I am glad I came back to the start of the series, although they do work well as standalones it is nice to see all the characters stories. Although, Janet Chapman’s characters do weave through all her series so if you want a complete view of the magical world that’s been created you will need to read her Highlander series (totally worth it I love her sexy Highlanders) and her Midnight Bay series (also worth it!).

But back to Spellbound Falls, one word best describes this book; sweet. So sweet I now need to plan a trip to the dentist, but the trip will be worth it. This is a very gentle romance, although the hero is described as big strong and alpha instead of bashing her on the head with his club dragging Olivia off by the hair to his man cave so he can have his wicked way with her, he lets his feelings be known and waits for her to approach the man cave all by herself.

There were also the kids adding to the adorableness of this series, Henry, Mac’s son was hands down the cutest kid I have ever read. I just know when he grows up he is going to be a heartbreaker (and probably not even realise it!) and I really hope Ms Chapman can squeeze a book out for him.

Although this might not be the most memorable book and  Mac and Olivia although they did have chemistry it wasn’t steaming hot, this was a well written and heart warming read that left me with a smile on my face.

I have read this book and one other in the series… I think it is a great series and I need to find the other books..

Thanks for the review Suz.

ARC Review: The Highlander Next Door by Janet Chapman | Under the Covers Book Blog