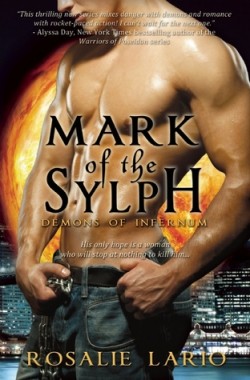 Mark of the Sylph
by Rosalie Lario

“Who wouldn’t like a woman who can cut off a demon’s head in heels? … I may seem to have some sort of a girl crush on Maya which makes this couple all the more doable in my book!” ~Under the Covers

Mark of the Sylph starts right where Blood of the Demon left off. While newlyweds Brynn and Keegan await their first child, the threat of a zombie apocalypse still looms over everyone’s head when an old rival sets his sights on the book of destruction. But Keegan’s brother Taeg will do anything to help his family and to see his nephew live. After days of research Taeg finds out that the only thing that can destroy the book that can end the world, is a sword that has not only been hidden for years but is also glamoured. Lucky for him, all those library visits paid off when he discovered Maya, the librarian, who apparently can see through glamours. Only problem is getting her on board. So Taeg does what any other demon in his family does at a time like this, he kidnaps her! What is it with these brothers kidnapping women?! But of course, nothing can be that simple, and soon Taeg finds himself needing Maya in other ways.

Maya: librarian by day and demon slayer by night. After living through a demon attack that killed her family, Maya is determined to kill every single demon she encounters, even if it is the hottie who’s been coming to the library every day. When she finds him tailing her after her shift at the library there’s only one thing on her mind and that’s killing the demon bastard. Unfortunately for Maya, things don’t turn out the way she planned and she ends up being his captive instead. What’s even worse? She’s figuring out that not all demons are bad; especially Taeg who for some reason seems a lot more appealing than any other demon she’s encountered. Soon Maya realizes that she may be the only hope to saving Taeg’s family so she joins the hunt for the sword.

Now let’s bring it on back to Taeg. He’s just so likeable. Not only is he hot and has a bad boy quality about him but he’s funny! Taeg also has a very kind soul, something that comes as a bit of a shocker to Maya since not only is he a demon but he’s a demon bounty hunter as well. It takes Maya a while to get used to the fact that not all demons are the same and it becomes a bigger challenge to fight the mixed emotions that start to develop for the oh so likeable Taeg.

Taeg seems to find Maya very appealing and who could blame him, Maya is hot! She’s a bad ass chick and you all know I love me a bad ass chick! Maya’s not annoying, she’s not clingy and she can kick some major ass! I mean who wouldn’t like a woman who can cut off a demon’s head in heels? Not only that but she has curves! YAY for curves! Maya’s not the normal tall, slim heroine, she’s short and thick! I may seem to have some sort of a girl crush on Maya which makes this couple all the more doable in my book!

I can’t wait to get to the next book in this series so I can see what these hot demon brothers have in store for the future.

April 17th, 2013: Romancing Rakes For The Love of Romance

Formally trained as a corporate and real estate lawyer, I practiced law for 5 years before finally admitting to myself that negotiating contracts wasn’t nearly as fun as dreaming up stories. As an avid reader of romances and supernatural stories, I knew I wanted to write urban fantasy and paranormal romance. Tales of vampires, demons, and other supernatural beings ensued.

When not writing, I enjoy spending time with my husband and son in our home state of Florida, as well as searching out things that go bump in the night. I still haven’t found any, but I’m keeping my fingers crossed.

If I ever do find evidence of the supernatural, it remains to be seen whether I’ll jump around in excitement, or run screaming in terror (but I’m betting on the latter)! 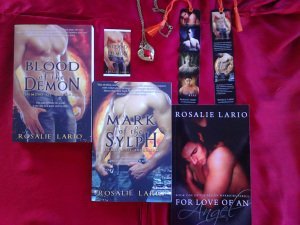 Guest Reviewer at Under the Covers Book Blog
I’m a 30 year old food and wine-aholic with a slight makeup obsession. When I’m not working long hours at the office, you can find me at home living the toddler life. So needless to say, after everyone is tucked in I like to spend my nights getting lost in a good book. Paranormal Romance seems to be my go to but these days I’ve been branching out and enjoying New Adult and Contemporary Romance.

Latest posts by Jessica (see all)

Looks exciting! Thanks for the giveaway opportunity.

Thanks for stopping in, Sophia!

Thanks for stopping by, Lori. 🙂

Thanks for the review – this sounds good!

After reading blurb, I am highly interested in checking out this series. You had me at HUMOR–love a smexy book that can also make me laugh.
Great posting!

I love a character with humor, Trish. 🙂

Thanks for the review Jessica!

I appreciate you stopping by and commenting, Timitra. 🙂

Sounds like a fantastic read cant wait to dive in.

How cool – I love this already – thank you so much for this great opportunity to win!

Thanks for stopping in, Felicia!