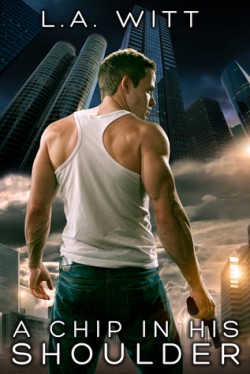 A Chip In His Shoulder
by L.A. Witt

Great action, combustible chemistry between Liam and Daniel and a conflict that has so much more room to grow. ~ Under the Covers

Liam is hired by his ex-lover’s father to take his son out. For a profit of $10 million, it seems like a pretty good deal. As a vampire, he has enhanced senses and abilities and with the addition of nanobots, Liam is virtually unstoppable. While Liam is set to take out Daniel, his ex-lover turns the tables on him and suddenly, both of them are in a load of trouble and require each other’s help to escape unscathed and alive.

As the first book in a two book series, L.A. Witt creates a vast new world with the Sky and the Gutter. Vastly different in their standard of living, Witt explores the major differences with some vivid imagery and though we don’t get as much as I would like, the details of the world is still fascinating and unique.

For a novella under 80 pages, I found that Witt was able to create such chemistry between Daniel and Liam. Both are smartasses and that gives ample opportunity for Witt to explore her fun side. Witt always finds ways to incorporate her great sense of humor into her work. It’s really become one of trademarks I think.

I do wish the book was longer because Witt touched on everything I like – Great action, combustible chemistry between Liam and Daniel and a conflict that has so much more room to grow. I simply wanted more of it and I think that last sex scene should have been longer …with a lot more explicit detail J

Overall, A CHIP IN HIS SHOULDER is a great start to the series. I am hoping that Witt considers writing more books set in this universe. I’m not ready to leave Liam and Daniel just yet.

I thought she did a great job of cramming it all into the page count too. These guys were great.