Who is Gabrielle Bisset? Tell us five things that readers wouldn’t know about you.

I’m a single mother, love languages (am currently learning German and plan to begin Farsi soon), love mysteries, my favorite show is Person of Interest, and I’m a natural redhead.

Can you tell us about your Sons of Nevarus series?

The Sons of Navarus is a PNR/UF series about eight vampire warriors called to save their world from takeover by the Archons, the law and order vampires. This civil war was prophesied by Idolas, the youngest son of Macaria, the Greek goddess of the blessed death and one of the first vampires. The daughter of the god of the Underworld himself, Hades, she fell in love with a human, Navarus, and when he turned into the first vampire, he turned her. The current eight Sons, Vasilije, Saint, Terek, Ramiel, Thane, Sion, Dante, and Nico, must find a way to stop the Archons. Ramiel and Thane are two of only four vampires on Earth who supposedly know how to decode Idolas’ prophecy, and they’re under the gun: if the Archons find out the secrets of the prophecy first, they’ll have everything they need to take control of the vampire world and subjugate all vampires forever.

BLOOD SPIRIT is book three in the series. Can you tell us a little bit about Terek and Ilona?

Terek was a poor sheep herder in his human life. Happily married, his life was turned inside out when his wife and newborn son died. Suddenly, he was alone in the world but now possessed the gift of telepathy, more like a curse to someone desperate to shut the world out and be left alone to die. Inconsolable, he turned to the church when he was sure he couldn’t go on any longer and became a monk, but the thoughts of others still plagued him. Just as the Black Death of the 14th century began, he was made vampire by a Muslim trader, who showed him another side to spirituality. But being vampire won out over Catholicism and Islam, and Terek dedicated his life to ensuring his kind wouldn’t die out, siring thousands of vampires (mostly female) and fighting in the Vampire/Human wars for centuries.

Ilona is a human mistakenly attacked by Archon hunters and saved by Terek. She was turned vampire by him never wanted to be a vampire, much less one of thousands of females sired by a male known almost as a god in the vampire world. She and Terek are almost complete opposites. She’s feisty while he’s quiet and mystical, and she fights him almost every step of the way. The worst part of it for Terek is that he can’t hear her thoughts, the only soul’s in centuries he can’t hear. But Terek has been searching for the kind of love he had when he was a human and if he can let Ilona in and trust her, they may be able to find happiness.

What can readers expect from your upcoming book, BLOOD PROPHECY?

Blood Prophecy is Ramiel’s book, but in truth, there’s so much going on in this story in addition to his love story. Readers will learn more about both Ramiel and Thane as they seek out the key that will help them decode the Prophecy of Idolas, in addition to learning more about Sion and Kali, Solenne and Saint, Vasilije and Sasa. Blood Prophecy will be a real turning point in the series and includes the introduction of the two new groups of paranormals who will help the Sons of Navarus when the final showdown between them and the Archons finally comes:  werewolves and dragon shifters.  Readers can expect to find out more about both groups in the books to come. Like I told my editor, “After this book, nothing will be the same again.” She read the book and agreed.

Do you have a writing process? Do you have to listen to music, have complete silence, write only on a full moon?

I hand write everything, and I have to have music on in the background. Usually it’s something like the 70s on 7 on Sirius radio, but almost anything is good. I can’t work in complete silence. I also need a glass of iced tea by my side as I write.

Marie Treanor is on my must buy list. Her writing is smart, which I love. I also love Christine Feehan. She’s another author who writes such smart paranormal novels.

What do you like to do when you’re not writing?

I love to read, watch movies, cook, and work out in the yard when it’s nice. I live in Pennsylvania, but I don’t like winter, so when the weather turns nice, I like to be outside as much as possible.

What is the last book you read?

Gods Behaving Badly. Admittedly it was for my day job, but that was the last book I read.

You are hosting a dinner party. If given the chance to invite characters from another series, who would you invite?

I’m a fan of Ward’s BDB heroes, so I think it would be interesting to have those boys over. I’m a V girl, so he’d be especially fun to meet.

If you could read one book again for the first time, which one would it be? 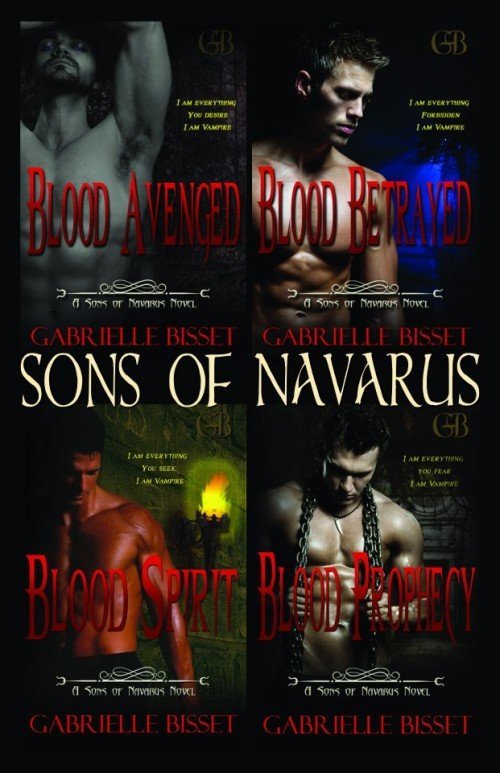 I am everything you desire. I am vampire.

Powerful and manipulative, Vasilije does as he pleases. A vampire beholden to no one, he takes what he desires, drinking deeply the pleasures this life has to offer.

When one of his own is staked, Vasilije must travel to New Orleans to exact his revenge. There he meets Sasa, a beautiful woman who arouses him like no other has for centuries. Vasilije’s need for vengeance is equaled only by his passion for her, but what he finds in his revenge is just the beginning…

The Sons of Navarus series continues…

I am everything you seek. I am vampire.

Blessed with the gift of telepathy, Terek always knows what a woman wants. His gift has afforded him nightly sensual pleasures and exotic treats for centuries, but beneath the surface he yearns for much more.

Ilona can give him what his soul craves, but only if he trusts his heart. One fateful choice made out of desire puts all he cares for in danger. With a civil war and the threat of Archon hunters at every turn, this Son may lose everything if he can’t find the balance between heart and mind.

Thanks for having me over today!

I am soo looking forward to Blood Prophecy can’t wait to read it. and I too love V lol .

Thanks for stopping over today, Margie! May can’t come fast enough, right? 🙂

I loved this interview, thank you, amazing! 🙂

i haven’t started this series yet but it does sound good!

Thanks for coming by, Maria! The series is about to get even better with Blood Prophecy too!