During the month of February I happened to come across a book that sounded completely out of the ordinary, but that immediately caught my attention.  It then made itself a must read immediately when I saw a favorite author of mine had just finished reading it and recommended the book.  So I cautiously picked up PAINTED FACES….and proceeded to devour it.  After I finished it, I had to tell my friends to read it (who then loved it as well) and even had Suzanne give it a read and she became a rabid fan as well.  So we are very excited that we get to bring you a quick glimpse into the mind behind PAINTED FACES, L.H. Cosway.  Please help us welcome her to UTC today!

Welcome to Under the Covers. I have to thank you for being brave, writing and publishing PAINTED FACES! It was such an amazing story to read!

We always like to get to know better the authors behind our favorite stories. Tell us five things about you that we wouldn’t otherwise know or find out (gotta watch out for our stalker tendencies)

Oh this is hard! Most of the things to know about me are in my bio or on my blog site, so this will have to be pretty random…Let’s see, I once played a hyena in a musical of The Lion King. When I was sixteen I auditioned for a reality television show, similar to X Factor. It took me a couple of years to realise that my fear of stages was never going to bode well for being a performer. I have a long standing crush on John Barrowman, who I actually see a little of Nicholas in. Yeah, I know he has a husband, forbidden fruit and all that ;-). I don’t believe in the saying never meet your idol, because I met mine and she was wonderful. Hmm, that’s all I can think of right now.

If you could write a warning for yourself as an author or individual, what would it be?

As an author I would say always take your time with a story. Sometimes it can be a hazard, especially with self-publishing, to want to rush a book and get it out there, and I feel like I’ve fallen into this trap a few times. In the grand scheme of things, the longer you spend perfecting a story the better it will be for readers.

In Painted Faces you created a unique hero, did anything inspire you in your creation of Nicholas?

Well, I’ve always found the whole gender bending side of life fascinating. Most of my stories will feature characters who are a little like that, either a boy who’s quite girly or a girl who’s quite boyish. Painted Faces was my first book where that sort of person was featured as a main character. In terms of what inspired me, there were so many things. Some aspects of Nicholas’ personality are from films like The Rocky Horror Picture Show or Stage Beauty or Breakfast on Pluto. Other parts are from what I’ve experienced of people I’ve met over the years.

Not only do you have an amazing and unconventional hero, but your heroine might be my favorite chick to read in a very long time. I loved Fred! What is your favorite thing about her character?

My favourite thing about her is that she was so easy to write. Of all the heroines I’ve created, Fred flowed out of me the most naturally. I guess that’s why people warmed to her because she’s not in any way contrived. She says the first thing that comes into her head, so I never really had to censor myself, I could just write whatever came into my head, too. I love that she’s so unapologetic about who she is. She’s not going to change for anybody, you can either take her or leave her.

What was your favorite thing about writing the story?

The dialogue between Nicholas and Fred was by far my favourite. They’re always teasing one another back and forth, or trying to out do each other with their witticisms. Fred was my first Irish heroine, so I really enjoyed being able to just write the way I speak in my day to day life, as it can often be a chore to make sure that characters from different countries are speaking in a way that’s authentic to them.

Was there a particular scene that was hardest to write? What about the most fun?

The scene where Nicholas withdraws from Fred towards the end of the book was probably the hardest. When he sings the song I Don’t Care Much to her I could really feel her sense of rejection, and her confusion over his swift change of heart. The most fun was their night out in Edinburgh, where Fred becomes so drunk that she almost gets knocked over by a car, mainly because it’s one of my favourite cities, but also because it’s quite reminiscent of some unusual experiences I’ve had there myself. I also loved writing the chapter where Fred goes to see Nicholas perform for the first time.

Both your other series Florence Vaine & The Ultimate Power series are Paranormal, what is it that draws you to this genre?

The thing I love about paranormal is that you can basically make anything happen. The sky is the limit. Both of these series are set in an unknown country, in a city that nobody’s ever heard of. For me this made it easier to “suspend my disbelief” as they say. I like to mix reality with fantasy, so you’ll have these very real people with real emotions who live in a world filled with extraordinary things. When I first started writing, my stories were always contemporary, but then I got hooked on supernatural books and ideas for creating my own mythologies began flooding into my head.

What are you working on at the moment? Are you planning on any more standalone books?

At the moment I’m working on a new contemporary romance called The Nature of Cruelty, which will be a standalone. It’s a love story that’s centred around the idea that one form of cruelty begets another, and it continues in a cycle, whether the cruelty is inflicted consciously or unconsciously. It features another Irish heroine and is set in London. I’m hoping to publish it some time this coming summer.

Come forth with an open mind, for an unconventional tale of love..

Dublin native Freda Wilson considers herself to be an acquired taste. She has a habit of making offensive jokes and speaking her mind too often. She doesn’t have the best track record with first impressions, which is why she gets a surprise when her new neighbour Nicholas takes a shine to her.

Nicholas is darkly handsome, funny and magnetic, and Freda feels like her black and white existence is plunged into a rainbow of colour when she’s around him. When he walks into a room he lights it up, with his quick wit and charisma. He is a travelling cabaret performer, but Freda doesn’t know exactly what that entails until the curtains pull back on his opening night.

She is gob-smacked and entirely intrigued to see him take to the stage in drag. Later on, Nicholas asks her if she would like to become his show assistant. Excited by the idea, she jumps at the chance. Soon she finds herself immersed in a world of wigs, make-up and high heels, surrounded by pretty men and the temptation of falling for her incredibly beautiful employer.

In this story of passion and sexual discovery, Nicholas and Freda will contend with jealousy, emotional highs and lows, and the kind of love that only comes around once in a lifetime.

L.H. Cosway is a self-employed writer, editor, and proofreader. She has a BA in English Literature and Greek and Roman Civilisation and an MA in Postcolonial Literature. She lives in Dublin city. Her inspiration to write comes from music. Her favourite things in life include writing stories, vintage clothing, dark cabaret music, food, musical comedy, and of course, books.

L.H. is graciously giving away three (3) copies of PAINTED FACES to some lucky maidens at UTC.  Believe me, you want to get this book ASAP! 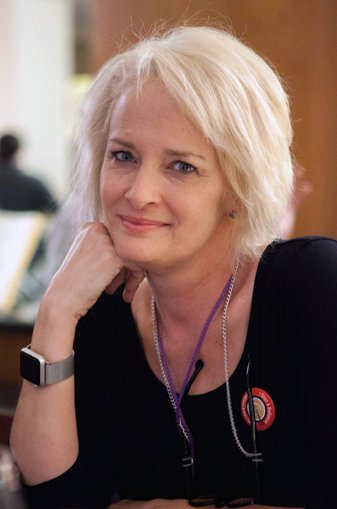 Thanks for the interview. I have this book on my to buy after Easter list.

Great interview! I love finding and hearing about new authors and books to read! Thanks for the giveaway!

Amazing! I love hearing about characters and how they come to life. Thanks!

I love this author. Her books are dark and intense.

Great interview, I love finding out the authors favorite and hardest to write scenes. This book sounds great, adding it to my ever growing TBR pile. Thanks!

Thanks for the fun interview! I’ve already read and *loved* this book!

This is definitely on my TBR list. Thanks for the opportunity to win one.

This book has been on my TBR list for a couple of months now, thanks you for the chance to try and win a copy!

After the review I now have to read it. I love meeting new Authors and finding their books. If it’s a print giveaway , please count me in.
Carol L

Sounds like an amazing read!! I would love to win a copy!!

Wow! This book sounds amazing! Have added to my wish list!

How cool!!! I like the cover. It’s different. Thank you for sharing 😉

thanks for the interview and giveaway!

I’ve heard great things about this book! Definitely going on my wishlist!

L. H. Is a new author to me. Thank you for the intro. The book looks good.

What a unqiue story idea! It sounds great and one that I am excited to read!!

Love this and can´t wait for my chance to read, =)
Thanks for the giveaway & Happy Thursday!
//Linda

I do love the idea of a unique hero.

have seen so many great reviews on this book…..can’t wait to read it!

Good interview. Sounds a great author and a beautiful book!

This book look intense. Looking forward to reading this book.
I enjoyed the interview, and i curious with this book.

Good interview. Painted Faces sounds intriguing. I might just have found a new author for my TBR pile.

Very interesting… You have my interest now and I want to read this book! Thanks for sharing and for the giveaway!

Don’t think I’ve ever read a book about a drag queen. Definitely gotta have this.

I agree about the paranormal thing

This sounds interesting and not like any romance plot I have read so far!

Painted Faces sounds like a very emotionally intense read. I love that the hero is so unique and unconventional. I definitely want to read this one.