Without a doubt, I’m a moody writer.  In order to get inside a scene or a character, the setting must be just right for me, otherwise I have a hard time channeling voices in my head.  One of the more prominent observations I’ve made over the years, is just how much music plays a role in my writing, as it’s not so much where I’m sitting down to craft a story, but how the parallel universe inside my skull is unlocked.  I like dark stories—Poe style—with twisted plots and characters.  But I’m just as comfortable writing these gothic tales in the middle of Starbucks coffee shop as I would be camped out in a graveyard somewhere.

Where I go from tapping the keys faster than I can keep up, to staring off at a blank screen for a half hour is all based on music.  My playlist is comprised of my favorite bands, my musical muses, like Deftones, Avenged Sevenfold, Paramore, Flyleaf, Stone Sour, etc. etc.  I’m very comfortable writing my edgy paranormal/dark urban fantasy stories with this kind of inspiration going on in the background.  Throw me in a room with Celine Dion belting out a love song and I can’t write a damn thing.

Soul Avenged isn’t a mushy gushy love story.  My main protagonist, Ayden, is a broken female with killer instincts and a passion for vengeance.  She hangs with a house full of brawny, casino-boss demons that do whatever the hell they want, when they want.  To immerse myself in her world, with her hardened personality, I needed to tease out that inner badass and music does just that.  Every morning while writing this book, I’d take a few minutes to get myself in the zone by listening to Paramore, Halestorm, and Flyleaf.

On the flip side, readers will get a small glimpse of a character named Zayne, one of the Sons of Wrath.  His part is small in this first book, as he is sent away to an underworld sanctuary to mourn the death of his mate.  I’ve actually written a flash and short story about him that I’m considering compiling into a small novella.  His character is very dark and depressed but at the same time, very unpredictable because his circumstances make him somewhat disconnected from our world.  Think of a gothic Mel Gibson in Lethal Weapon, uh, but without the 80’s hair and cheesiness.  I could come up with no better source of inspiration in writing Zayne’s character than Nine Inch Nails, particularly the song, Something I Can Never Have.  Lana del Rey’s Dark Paradise is another song I use quite a bit to help develop his mysterious and somber personality.

So whether I’m sitting in the middle of a busy mall or the quiet of my office at home, as long as there’s music, I can easily slip from real life into this dark and deadly realm.

Passion is blind in vengeance and love  …

Ayden’s suburban home was invaded by a pack of Lycans.

The brutal attack is the only memory she carries of her former life.

Now, one motive burns in her soul:

The Sons of Wrath—a brood of vengeance-dealing warrior demons—band with Ayden to hunt the Lycans on Detroit’s most deadly feeding grounds.

Unfortunately, the newly bitten Lycan has something she wants—clues that may finally lay her past to rest.  To reach them, she must be willing to submit to the sensual pleasures awakened by his touch.

Time is running out.

In seven days, Kane will become what Ayden despises most.  She can halt his transformation but the antidote requires the ultimate sacrifice.  As the beast takes hold, Kane becomes more of a threat.

Ayden must choose between her lust for revenge, or surrender to her enemy and discover a horrible truth. 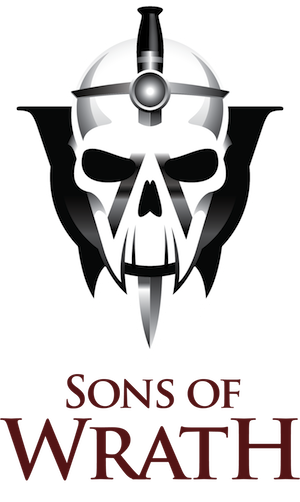 The frigid sensation sliced through Ayden’s veins, leaving a numb trail in its wake as she stepped through the remains of the abandoned factory—one of many havens for the crack addicts and prostitutes. The old Packard Plant had become no more than a ghostly haunt for tormented souls.

Shitholes were cropping up everywhere, much more rapidly than ever before. Detroit, once a thriving city, brought to ruins. Gray and lifeless like the suffocating overcast that loomed during daylight.

A vile stench assaulted her nose, a potent blend of piss, sex and rotted meat, as garbage crunched beneath her boots. Foundation had collapsed all around where she stood, crumbled as if the building would fold into the depths of hell.

The graffiti spattering the walls gave the impression that gangs were the real threat—‘We don’t die, we multiply.’

Right. Like gangs own any part of this city, anymore.

A Beretta, loaded with silver bullets and a silver parrying dagger rested at one of Ayden’s hips, a silver bullwhip at another, as she moved past comatose bodies and decaying corpses.

Deadened eyes slowly tracked her movement in the darkness, squinting, as though craving the light that hers didn’t need to see. Humans so strung out on drugs, they failed to recognize the half-eaten carrion were once their own kind.

Not that knowing would stop them. They’d apparently chosen to face danger rather than kick their addiction, roaming the streets every night in search of their next high.

They were already dead. Death just hadn’t come to collect yet.

The blissful sigh of a hopped-up junkie reached her ears. She snarled her lip. “Enjoy it while it lasts, asshole.”

It’d be one thing if they were homeless. Hell, she might’ve fired a warning shot to evacuate.

The homeless didn’t come here, though.

Neither did the police—making it the perfect spot to get wasted and hustle some money.

Shots fired would’ve been nothing more than a momentary distraction before their minds slipped back into their ignorant state of euphoria.

For any other girl, the place promised very bad things—an opportunity for a sadist to live out wild fantasies without ever getting caught.

For Ayden? Humans posed no threat. Their fragile bodies would shred like paper dolls against the work of her hands. Luckily for them, she sought something else to sate her thirst for bloodshed, something far more threatening than their most psychopathic criminal—and she’d tracked it right to the surrounding cornucopia of human flesh.

A thin, black mesh hoodie beneath her jacket concealed her face while the shiny black leather covering her body acted as a beacon in the moon’s light.

Contrary to the fairytales and movies, they didn’t need a full moon to change.

Werewolves, some called them—like a supernatural Bigfoot on the loose. Nothing more than fodder for the tabloids, not to be taken seriously.

Lycans is how those ‘in the know’ referred to them.

The bastards could transform at will. In the middle of the day, if they wanted. Though, like a true predator, they’d evolved throughout the centuries, eluding humans by hunting them at night, catching their prey in their most vulnerable state.

Ayden reached a door in a darkened corner. The stubborn panel held stiff against the push of her palm, giving way only beneath one heave backed by exceptional strength. Beyond, a spiral of stairs wound above and below. Visuals flashed through her mind as she imagined the stairwell bustling with men in suits who passed each other with carefree visages—every one of them ghosts that roamed the destruction.

A quick scan showed no movement.

She tipped her head back and inhaled the repugnant scent the beasts had left behind.

Her feet took light steps, hardly making a sound against the concrete as she descended further into the pit of hell otherwise known as the lycan’s lair.

With each step, she wished her heart would pound wildly in her chest, or that her pulse rate would surge—both human reactions to fear. Neither of them did.

What fragments of her human soul remained had been stripped bare the night the Alexi made her one of their own. Even that, as tortuous as the unrelenting pain that seared through her body while it underwent its transformation, was a memory she could hardly summon anymore. Only a silent blackness dwelled in the place where snapshots of her life would have roamed free, a void that she couldn’t see beyond, separating her present from past.

She’d become one of them: an Alexi soldier. A cold and remorseless killer designed to eradicate in one sweep.

A noise piqued her sensitive ears.

It could’ve been the skittering feet of a mouse beating against her skull like a base drum.

The thirst for blood moved like a dark storm cloud through her veins, a mix of raw adrenaline and something else—the something that came with her transformation.

Her feet moved on impulse, carrying her closer to whatever it was, rendering it nothing more than a thread-width away from its death.

In the corner of a landing, he sat hunched over on himself, body convulsing.

A grin skated across her face as she approached her first kill of the night. 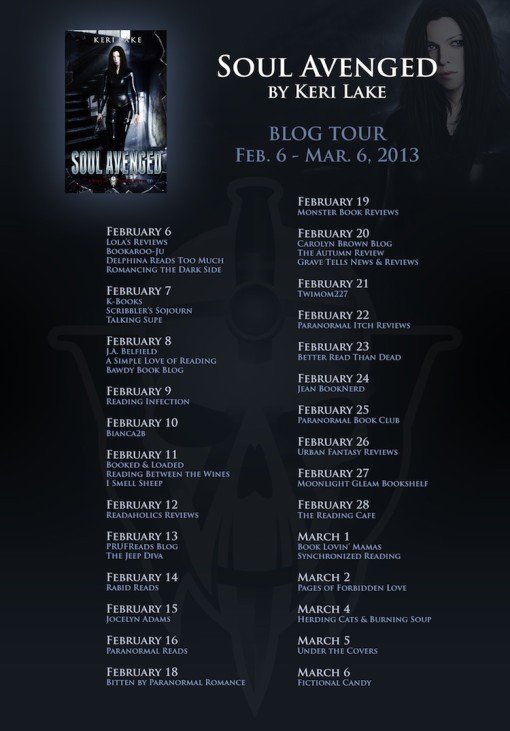 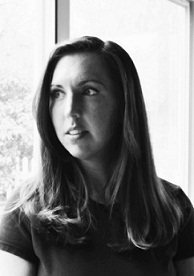 Keri Lake is a married mother of two living in Michigan.  She writes paranormal romance, urban fantasy and loves a good, tragic love story.  Though novels tend to be her focus, she also writes short stories and flash fiction whenever distraction manages to suck her in to the Land of Shiny Things.

Looks like a great read- and a great contest!

Great giveaway, and I love this cover, awsome!

The mystery of her past combined with Kane turning into what she despises. That sounds like a very interesting plot. Thanks for the giveaway!
Nicole.nobles@aol.com

thanks for the great excerpt ^^

Soul Avenged sounds amazing from the little blurb that I read. This looks to be an interesting and gripping book! I predict that it would be VERY difficult to put down!

Thank you to Under the Covers for hosting a tour stop! You rock <3

And thank you for the kind comments! For those who want to give it a go, hope you enjoy the read 🙂

definitely my type of book!

This sounds soo good! On my wishlist!

I love urban fantasy AND paranormal romance and is always looking for new authors and series to read. I am very curious to discover that book. Thanks.

Honestly, because the cover model reminds me of Selene from the Underworld movies and because this comes highly recommended by one of the UTC ladies!

Love the looks of this series! Definitely added to my TBR list!
holly.collins1(at)yahoo(dot)com

Yep, Just me..still stalking, stalking stalking. I’m actually just hoping to get any bit of Kane and Zayne teasers I can;) After reading the excerpts and their love letters, I just need MORE. Can’t wait to start this series!!!!!

thanks for the excerpt

KeriLake.com | The Official Website of Keri Lake » WINNERS OF THE SOUL AVENGED GIVEAWAY!!