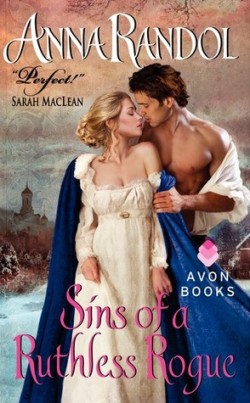 Sins of a Ruthless Rogue
by Anna Randol

“Sins of a Ruthless Rogue by Anna Randol is cloak and dagger and intrigue at its best.” ~Under the Covers

Olivia Swift is beside herself when Clayton Campbell, the beau that she believed was executed ten years ago, appears at her place of business for somewhat of a reckoning. Clayton Campbell was accused by Olivia’s father, the owner of the mill where Clayton worked, of illegal activities which included counterfeiting. Clayton was convicted and sentenced to die but ten years later, he’s back and very much a changed man, a man set out to ruin the Swifts and their mill.

Young and innocent, Olivia Swift thought she was doing the right thing going to her father. She was in love with Clayton and was sure he was in love with her as well. Years later, her father has had a stroke and Olivia is trying to keep the mill and the town from going under. When Clayton returns and tells Olivia that her father’s and her days are coming to close at the mill, Olivia must think of something to thwart Clayton’s revenge. Before Olivia gets a chance to do anything, she is kidnapped and taken to Russia by revolutionaries.

Hmmm, this keeps getting curiouser and curiouser by the minute because Olivia is mistaken for a spy , La Petit, who just happens to be associated with Mr. Campbell, who has spent the last ten years in the espionage game. What has Olivia gotten into now? When Clayton finds out that Olivia has been taken, he dashes off the Russia to attempt to save her. Conflicted, Clayton tries to keep hidden his feelings for Olivia since he must destroy her family legacy, but he also needs to save her from danger which she has nothing to do with, until now.

Sins of a Ruthless Rogue by Anna Randol is cloak and dagger and intrigue at its best. The characters are smart and savvy and take us places where we haven’t been before. Russia, on the verge of revolution is exciting and romantic, Clayton and Olivia fit quite well. As much animosity as Clayton has deep within for what Olivia’s father has done to him, it is neatly pushed aside while they both come together to save Russia’s monarch from certain death. Will Olivia understand all that Clayton went though? Will he realize that the past was not her fault? So much and more is revealed in Sins of a Ruthless Rogue by Anna Randol.

Anna Randol was raised in Southern California. When she was eight, she decided her diary was too dull and decided to write as if she lived on a raft in the Amazon with her imaginary dog, Cream Puff. At twelve, Anna decided racing down rapids with only a dog for company might get rather lonely. Handsome British heroes began to appear on her raft, and her love of adventure-driven romance was born

Anna currently lives with her family in Southern California, where she loves eating chocolate, making plans for remodels she never intends to do, and drawing pictures in the sand at the beach to baffle future archaeologists.