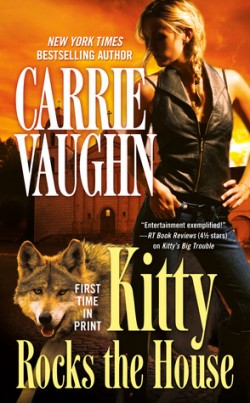 “KITTY ROCKS THE HOUSE goes back to what I originally liked about this series!” ~Under the Covers

As I’ve mentioned before, I’ve found it difficult to enjoy some of the previous books in this series because of my fixation on what happened to Cormac and wanting and expecting his situation to be fixed.  I have now, sort of, gotten over it.  I’m not sure if it’s because of that fact, or the plot of this book in general, but KITTY ROCKS THE HOUSE goes back to what I originally liked about this series!

Basically we have a new vampire in town, and a new wolf.  The vampire is…. a priest, and he’s looking to recruit Rick into their order.  The new wolf wants to be part of the pack, or does he really?  And in the meantime, they are all still waiting to deal with The Roman.

Kitty is not so much into her conspiracy theories this time around, and is also having to deal with the consequences of her lack of attention to her pack and to her family.  She’s still learning to be alpha and sometimes she gets it right, sometimes she makes mistakes.  But in this book I believe she solidifies her connection to the pack.  I have to also admit that Ben steps up a bit as her mate and as a strong alpha when needed, even though he’s more beta than I like.  But I’ve come to the conclusion that him being the way he is works perfect with Kitty, who is also not the take charge wolf either.

Cormac on the other hand was a big help and some of his old personaility came through just a bit.  He does seem to be growing into his connection with Amelia and maybe this is something that can just help in the future.I am looking forward to seeing more of that and more of the old Cormac.

This was an extremely easy and fast read for me but had me gripped enough that I didn’t put it down until I finished.

Thanks for the review. Nice to see that you enjoyed this one. I too have not enjoyed every book in this series.

Hope you also get to enjoy it. I find that you need to give up on the old hang-ups to enjoy it.

Yeah, I’m with you. I have been sort of holding my breath waiting to see how the Cormac situation was resolved. I’ve been hoping he and Kitty would get together at some point. Oy! Glad you enjoyed the read, none-the-less. 🙂

Under the Covers Book Blog
Admin
Reply to  engarde

I wish the author would realize there’s a whole group of us out there that are Team Cormac. *sigh*

yup…i haven’t read a book in this series since i don’t know when because of the cormac situation …i have been hoping that those two would get together too… :/

Under the Covers Book Blog
Admin
Reply to  Elizabeth P

At this point I don’t see how they will get together because the relationship between Kitty and Ben keeps getting stronger. But at least I would like to see a better future for Cormac. He started on his way to that in this book IMO which was a great relief.

I’ve only read one book in this series because I didn’t particularly care for the heroine. Maybe I should give it a second try. Thanks for the review!

Kitty is def not your kick ass heroine. She has other issues as well, but for the most part I usually enjoy her character.

Thanks Francesca. This is a new author o me.

Thanks Francesca…adding this series to my ridiculously long wishlist!

Ha! I know all about long lists and wishlists… One day!