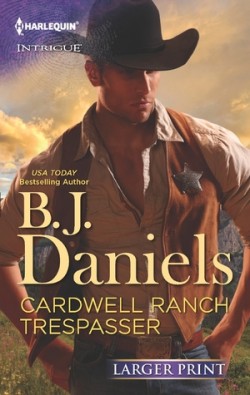 “B.J. evokes such emotion that I’m completely sucked in as usual even though I know things are going completely awry.” ~Under the Covers

Dana Cardwell Savage and her handsome Marshall husband, Hud Savage have a good life now. After a difficult beginning they are a strong couple with four beautiful children and a happy home. Dana’s upbringing with her siblings was a tad off-colored and not as close as she would have liked it to have been, so when she finds that she has a cousin on the Justice side of the family she knew nothing about, she invites the cousin to stay with her family to become acquainted.

Right off the bat we know that Dee Anna Justice is going to be trouble with a capital “T”. She may look like Dana, but there is something dark about this woman who claims to be the Cardwell cousin and Dana’s best friend, Hilde Jacobson has her number. When Dee realizes that Hilde is going to be a problem, she attempts to push Hilde into the river but saves her at the last second. Hilde says nothing to Dana but she is worried that this cousin, if she even is a cousin , is up to no good and wants Hud for herself. Dee Anna is a brilliant liar in Hilde’s estimation and she has Dana easily wrapped around her finger.

Hilde enlists the help of Deputy Marshall Colt Dawson, who has a huge crush in Hilde, in finding out what Dee Anna Justice is all about. Even though Hilde has turned him down when he asked her out, Colt has feelings for the honest and hardworking store owner and is the only one who believes her when issues start happening. The deeper Dee Anna becomes with the Cardwell- Savage family, the more dangerous things become and Hilde will put nothing passed this stranger who has invaded this peaceful home. Lives will be at stake if only Hilde can get her best friend to listen to her instead of Dana thinking that blood is thicker than true friendship.

Never have I begun a book knowing right off that the first character I meet is evil and twisted and she going to end up tearing a good family apart and there’s nothing you can do about it. This is typical B.J. Daniels, who immerses you right in her story kicking and screaming along the way. B.J. evokes such emotion that I’m completely sucked in as usual even though I know things are going completely awry. I love that the secondary story is always just as amazing as the main one and I fall for her characters intensely. Even though Hilde is as skittish as a fish she comes to realize that there is much more the Colt that she originally thought and following him down his path isn’t a bad thing at all. I loved this book and I know you will as well!

What’s not to love about a cowboy. I need to get this book. Thanks Kimberly.