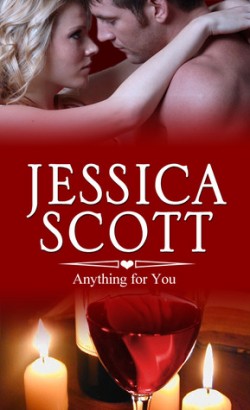 Anything for You
by Jessica Scott

What I love about Ms. Scott is that her tales consist of “real life” issues and awareness to them ~Under The Covers

Anything For You is a sweet surprise. Ms. Scott had given her fans a chance to peak in to Shane and Jen’s Happy-Ever-After(HEA). What I love about Ms. Scott is that her tales consist of “real life” issues and awareness to them. From the beginning of this series, that is exactly what she has given her readers. She has done that again in this novella.

If you know Shane and Jen, you know that they are both with tragic pasts. Since finding each other and achieved their HEA, issues have come up. Unfortunately, Shane is struggling with some fears of losing Jen. I think Shane, given his past, is acting stupid but with the most valid reasons. I really don’t blame him and in all honestly, I think he just acted as any man would do in real life. I don’t want to reveal too much but bottom line is Shane and Jen struggles with trust and fears that are totally normal in a relationship or life in general.

I am just glad that they are able to come to terms, work through their issues and giving readers another happy conclusion.

I love this short story.. and I love this whole series… Can’t wait to read more..

I adored this one too.