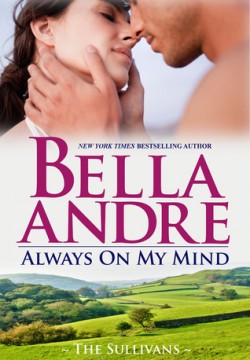 Always On My Mind
by Bella Andre

Bella Andre has singlehandedly invigorated the genre with her endearing characters and stellar writing. When it comes to Contemporary Romance, no one does it better than Andre! ~ Under the Covers

Bella Andre presents readers with one of the most anticipated books in the Sullivans series. Lori Sullivan aka Naughty has always been the firecracker of the family. She has been the rock, the troublemaker and most lovable of the bunch. But when her heart is broken, who will be there to comfort her?

Lori takes a complete break from her dance career and goes on an impulsive trip that takes her to a farm far away from anything that can hurt her again. She applies for a job as a farmhand and things get crazy from there! The owner of the farm is no other than Grayson Tyler, a city runaway himself. After the death of his wife, he escaped his own past by working on the very same farm that Lori is now hoping to be her escape.

Out of all of Andre’s heroes, Grayson is the most different. He is the most scarred and the most reserved. Nothing gets past the shields that he has placed around him – not even the firecracker that is Lori Sullivan. But slowly, her charm gets to him and readers see glimpses of a man beneath the tough exterior.

I absolutely loved the first half of the book where Lori and Grayson bicker and snarl at each other. Lori manages to take it all in stride but amongst the hostility that emanates from Grayson, there is also attraction as well. The hilarious antics ensue once you put Naughty and farm animals together. Some scenes had be laughing out loud and grinning from ear to ear.

In addition to that, there were also moments that nearly brought tears to my eyes. There were moments that were touching and moments that were sad. I love the way Andre is able to incorporate a whole range of emotions in a single book. Her writing is always so poignant and inspiring, that I can never get enough of it!

The well-loved Sullivan family is present and well represented. Marcus gets growly over his sister and it’s nice to see the sisterly bond between Naughty and Nice.  Andre even treats readers with a scene from Mary Sullivan’s POV!

I initially thought that this would be the last book of the Sullivan series but IT IS NOT! Andre has announced that Rafe Sullivan will be getting his own book (he’s the cousin from Seattle) and also Mary will be getting her story told later his Fall! That means that there are more books to come! Woo hoo! This gets me very, very excited.

Bella Andre has singlehandedly invigorated the genre with her endearing characters and stellar writing. When it comes to Contemporary Romance, no one does it better than Andre!

Already on my kindle ready to read… Love Love this series…

Under the Covers Book Blog
Admin
Reply to  Kathleen O

Thanks for the review Ann.