We had the opportunity to ask Sherri Hayes a few questions about her latest release RED ZONE, but got a little distracted with the hot quarterback she had with her… so we decided to focus on him.  😉  Can you blame us?

Welcome Gage! For the sake of our readers, can you please introduce yourself? You can tell us anything interesting about yourself as well.

Hello everyone. 🙂 I’m twenty-six, and the youngest of four boys. I live in Nashville, TN where I play pro football—something I’ve wanted to do since I was a kid. Achieving my goals and living life to the fullest have always driven me, so I whatever I do, I tend to give one hundred percent. Growing up with three older brothers might have had something to do with that, too.

Let’s talk about family dynamics. You seem to be the only professional player. Would you consider your family to be sports fans as well?

Given there were five males in my house growing up, yeah. We’re all sports fans, especially football. All of us brothers played growing up. None of the others had the drive to play professionally, though.

How have you handled your success with fame?

LOL. I’m not sure I was given much of a choice in that. Anytime I would get a big head, all I had to do was take a trip back home and Ma would set me straight. She doesn’t allow much in the way of disrespect or thinking your above anyone else. When I received my first big paycheck, I flashed my money around some. After I bought my house, however, Ma and Dad sat me down and made sure I wasn’t letting the money go to my head. I was, of course. All those zeros are a lot for a twenty-two year old when it comes right down to it. My parents have never steered me wrong, and I’m glad I listened to them.

How would you describe your experience with fans? Have any bad mishaps with stalkers?

Most of the time, the fans are great. The team sets up meet and greets and signings. There’s nothing like a kid coming up to you and saying he hopes to be just like you one day. I’d be lying if I said there weren’t a few exceptions. If I have a bad game, it’s not uncommon for me to get nasty letters. It comes with the territory, however. People are passionate about their football team. There have also been a few overzealous women, but nothing too over the top.

Paul is the oldest. He’s always been protective of all of us, even after he married Melissa. Chloe, his daughter, is the center of his world. He’d do anything for her. Paul’s been on the police force in Indianapolis for over ten years. Losing Melissa crushed him, but luckily, he had Chloe and the rest of us to bring him back.

Trent’s four years older than me, the youngest before I came along. He owns his own landscaping business in Cincinnati not far from our parents. Given all the rest of us live farther away, he’s helped Ma and Dad out these last few years more than the rest of us.

Sherri Hayes is a good friend of yours. Care to spill one secret about her that readers wouldn’t know?

She is extremely disorganized. Even in her writing. There is no plotting or planning. She just starts writing and lets things happen. I could never get away with that on the field. As a quarterback, I have to be flexible and adjust depending on what I see from the defenders, but I never go into a game without a plan. I have no idea how she does it, but considering she gave Rebecca and me our happy ending, I suppose I can’t complain too much. 😉

Do you know any details on FINDING ANNA?

No. Sherri is very tight-lipped about it. Occasionally she’ll let something slip, but it’s only enough to tease. Maybe I should have said that in response to your last question. Then again, if you read her blog or follow her on Facebook, you probably already know what a tease she is.

After a case ended badly for Rebecca Carson, she’s losing her mind sitting around her apartment waiting on her superiors to allow her to return to work. Since she was a teenager, the only thing she’d ever wanted was to join the FBI. Now that dream was in danger.

Gage Daniels has made a pretty good life for himself. A nice house. A career he loves. As a professional football player, he’s used to getting almost everything he’d ever want with just the snap of his fingers. This includes women. A well-timed smile is usually all it takes to attract the opposite sex, especially in Nashville.

When a stalker threatens Gage, the team owner calls an old friend, Rebecca’s ex-partner Travis Hansen, to help protect his star quarterback and find the person responsible. Hansen offers Rebecca the job, and she jumps at the chance. It’s work, and it will get her out of her apartment. How bad can it be?

Posing as Gage’s girlfriend, however, isn’t as easy as it seems. The man is relentless. Rebecca must work to protect Gage while staving off his advances. She’s there to do a job, nothing more. The last thing she wants is to be another notch on a hotshot athlete’s belt.

As the stalker continues to up the ante, Rebecca finds it harder and harder to keep her distance from Nashville’s star quarterback. He isn’t what she expected in one of the city’s most notorious playboys. Now all she has to do is keep him safe until they can find his stalker, and hope she doesn’t lose her heart in the process. 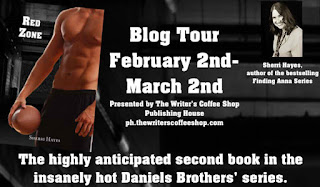 Check out the previous posts in the RED ZONE tour 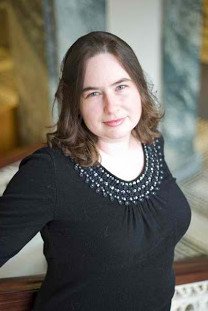 Sherri is the author of several novels, and a short story, A Christmas Proposal. She lives in central Ohio with her husband and three cats. Her mother fostered her love for books at a young age by reading to her as a child. Stories have been floating around in her head for as long as she can remember; however, she didn’t start writing them down until she was thirty. It has become a creative outlet that allows her to explore a wide range of emotions while having fun taking her characters through all the twists and turns she can create. When she’s not writing, she can usually be found helping her husband in his woodworking shop.

TWCS has an ebook copy of RED ZONE up for grabs today!
Open internationally

this sounds fantastic! Thanks for sharing!

Gage sounds like a fun, alpha guy. Can’t wait to see how having a female protect him is going to play out!

can’t wait to read this book! Put it right on my wish list!!

Gage sounds down to earth and I enjoyed the interview cant wait to read the book!!!

This sounds like a great book. I love books eith atheletes. I also love that you have a female protecting a professional football player.

Gage sounds like my kinda guy! Thanks for sharing the interview, this is definitely moving up on my TBR list 🙂

Great interview! I am loving Gage!

Love the cover!!! I am definitely picking this one up! Thanks! 🙂

This one will be going on my TBR pile.

Great interview! Love it. Thanks for the opportunity to win this giveaway!

Gage, when you retire from sports, what will you do? Do you have a college degree?

Hoping to win. Maybe Friday will be my lucky day.

Great interview and the book sounds awesome!! Thanks for the giveaway!!

I love that you interviewed a character. Really gives you a good idea of what the book is like.

A fabulous interview with Gage thank you.

This book sounds awesome! I can’t wait to read it!

LOVE football and can’t get enough of books with hot athletes. And Gage is a great name for the hero! Definitely adding this to my wishlist.

Great interview with Gage! Can’t wait to read this book!
Thank you for the giveaway!

You guys rock! Love this blog; love the reviews and interviews…I am always in the “book” know cause you guys always keep me up to speed…Red Zone is definitely on my to Read list!!!

Love the book covers 😀 Thanks for the giveaway 🙂

Nice character interview. Liked how he shared about his family

I liked this character interview! Gage sounds very intriguing and very humble which is sweet. Looking forward to reading this book!