Join our newsletter to be the first to hear our latest news! Learn More
Home / Reviews / Review: Unleash the Night by Sherrilyn Kenyon 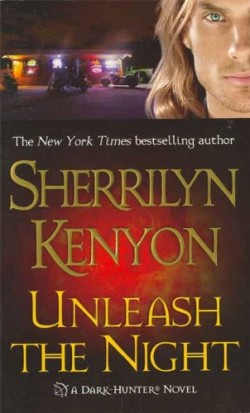 Unleash the Night
by Sherrilyn Kenyon

I love the way SK is able to integrate soooo many aspects into this one world. It makes it so much more appealing and interesting that it’s really hard to walk away from once you finish the book. ~ Under the Covers

True to Sherrilyn Kenyon’s ways, we have another tortured hero who seems to have a heart of gold! Wren Tigarian is probably the most sweetest, gentlest soul of the bunch and there was something about him that made me want to curl up and hug him. As I read UNLEASH THE NIGHT, I became so attached to Wren that I felt that if anyone threatened him, I would definitely rip them a new one. He has become my baby.

I won’t go into a ton of details about the plot but Wren is a Tigard and he’s been having trouble dealing with this other side of himself. Even as a powerful white tiger, he sees himself as an abomination so the romance he finds with Marguerite seems very new to him. He doesn’t see himself worthy to be with a Senator’s daughter. But Maggie holds on to him and I think it’s so sweet that she sees him in a bright light because it soon changes how Wren sees himself as well.

The tone of this book felt a little different to me than the others. It almost feels like a Young Adult book with the way SK approaches the romance. It’s very unsure and tentative and it blooms quite fast and furious as first loves often do. Also playing into that part is the emphasis on the taunting and hassling by Maggie’s friends in the beginning which reminds me of the sort of thing you’d find in YA books. Maggie and Wren just seemed like two young hearts finding love for the first time and it was such a thrill to read it.

Readers are introduced to Savitar as well and I find him sooo intriguing. He better get his own book! I’m dying to know more about him!

There’s a time travel aspect to this book that makes this book really unique. There was a time there that confused me but overall, it definitely made this book a better one. I love the way SK is able to integrate soooo many aspects into this one world. It makes it so much more appealing and interesting that it’s really hard to walk away from once you finish the book.

Thanks for this review – I haven’t started this series yet but I’ve heard great things about it ….hanging head in shame…..

LOL! I’m barely making my way through the series myself!

Wren!! One of my series favorites for sure. I think the books leading up to, and including, Acheron are the best 🙂

Under the Covers Book Blog
Admin
Reply to  Paranormal Haven

I looove Wren! So glad I’m reading this series!

I really need to re-read this series. Those first books are some of the best and Wren’s is one of my favorites ♥ Savitar is so enigmatic & elusive and I love the tidbits we get of/from him throughout the series. Unfortunately, we don’t have a Savitar book yet, but I hope we get one in the very near future.

I’m hoping that SK does a book for Savitar!! I would LOVE to read that. I’m pretty excited for Styxx though!

This was one of my favorites. I haven’t been keeping up with the series since “Acheron”, but if she writes Savitar’s book (PLEASE PLEASE PLEASE) I will be all over it!

Under the Covers Book Blog
Admin
Reply to  pamelia

I wonder if she has plans to write him a book soon! I think readers would be thrilled!

Aw Wren was one of my favorite sin that series. It’s been years since I’ve read it though. I’ll second the needing to go back and re-read the series. Some of those early ones were amazing!

Under the Covers Book Blog
Admin
Reply to  Anna@herding cats

Wren seems to be a series favorite! You know, starting the series is a little daunting when you look at the numbers but they are SO worth it! great romances!

I’ve not read this series. It sounds like I need to change that.

I really need to read this series soon-thanks Ann!