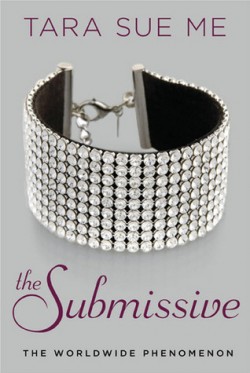 The Submissive
by Tara Sue Me

“I really enjoyed the heck of it.” ~Under the Covers

Another fan fiction/Fifty book you ask?

Yes…it is exactly that. Well, not exactly. Apparently, this is the book that E.L. James got some of her ideas from…that and Twilight. And while I didn’t really get a lot of Twilight from this book, you can definitely see the things that E.L. James picked out of it. As far as it being a fan fiction, the only clue I had was the lack of the character’s physical descriptions.

That being said, I really enjoyed the heck of it. I’m not sure what’s happened but this story line has not gotten old for me. Each story seems to have enough differences to keep me entertained…and entertained I was.

There’s a contract to sign, medical forms to fill out, exercise programs to follow as well as eating and sleeping requirements and BAM, come Friday at 6 pm it’s time for the festivities. Nathaniel has a couple of rules…he doesn’t do kissing and his subs do not spend the night in his bed. That really didn’t bother me too much except he had Abby sleep on a pallet on his bedroom floor sometimes and I didn’t really care for that. I wish I could say she didn’t either but while she wasn’t happy about it, she was happy to fulfill her submissive role…whatever Mr. West wanted. I don’t know a whole lot about BDSM but it seemed like this was very light. There was only one instance where I felt things went a bit far.

Abby was easy to like. Even though she’s a librarian, she’s not shy or hesitant and she knows what she wants and that’s Nathaniel anyway she can get him.

Nathaniel on the other hand is a bit cold. You can tell there is something going on there and slowly, things start to add up from the little pieces of information we get from his friends. It’s a great little twist!

The cast of characters are really enjoyable and they are the ones that help shed some light for Abby and maybe give her a bit too much of a push into thinking this arrangement could actually be a relationship. Nathaniel’s dog, Apollo, also plays a big part and you can’t help but love him.

One of the main differences of this story is Abby and Nathaniel’s love of books especially poetry. I love the little game they play with trying to figure out who said what. But my most favorite thing was when Nathaniel visited Abby at her work and left her a rose…a cream colored rose with rose tipped petals. Her coworker explained what the rose meant from a poem:

There definitely is drama and we get a good amount of it! For every little crack that Abby puts in Nathaniel’s tough facade, Nathaniel builds it back up “brick by brick.” It’s extremely frustrating!

The ending sets things up nicely for the next book called The Dominant which sounds like it will be from Nathaniel’s POV or at least part of it. I am sooo looking forward to that!

♥ “Thank you for escorting me on my tour of the Rare Books Collection.”

♥ “Now that,” he said against my neck, “was an amazing half-time show.”

♥ “You were the goddess I longed to worship. My unobtainable dream. The relationship I could never hope to have.”

loved the interview….can’t wait to read this book!

Oh, so this is the original 50? I will definitely be reading this. I just found it actually on Netgalley. Hope they send me a copy. It would be fantastic. Thank you for sharing that quote. My goodness, that was beautiful and sexy. I am saving that. Amazing review. Thank you so much, I can’t wait to read this 🙂

Thanks Diana…i hope u get it from Netgalley. If not, hope u enter the giveaway.

i agree w/u about the quote….i loved that!

Great interview – I always like to hear little things about authors that make them so much more personable.

Thanks Sharon for the review.

I have this to review from Netgalley and I can’t wait to start reading it today especially after reading your review . It sounds like a great book!!