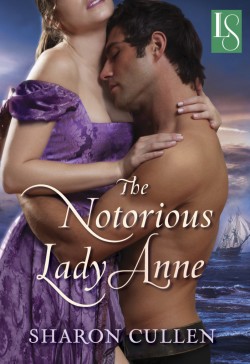 “I thoroughly enjoyed this high seas adventure with a kick and I am looking forward to more from Sharon Cullen.” ~Under the Covers

Nicholas Addison has an extreme distaste for pirates. His mission is to find out for his current employers who is plundering the Blackwell Shipping Fleet and bring them down. The handsome but injured former British Navy man sets out from London by sea to Boston to discover who has been pirating the ships, rumor has it that a female pirate, known as Lady Anne is the culprit, but Captain Addison does not believe in pirates, little alone a female one.

While still in London, Nicholas becomes acquainted briefly with Mrs. Emmaline Sutherland at a ball. He finds her to be very different than most of the females he has ever known. Emmaline in bold and outspoken and quite confuses the man, but that’s all right, Nicholas won’t see her again, right? Wrong, the very next day, Mrs. Sutherland winds up as the Captain’s sole passenger for the trip, and this is where the adventure begins.

Emmaline Sutherland is no simpering female, and she is much more than Captain Addison could ever have imagined. Emmaline Sutherland is in fact the Notorious Lady Anne who knows a thing or two about sailing and being a pirate. To Nicholas’ dismay, Emmaline is on a collision course to destroy anything and everything belonging to Blackwell Shipping and she will go through anyone or anything to achieve that end. Romantic feeling aside, Nicholas has his mission and Emmaline has hers. When their paths cross, can either of these stubborn beings be deflected in their tasks? That, dear readers is part of the excitement in this book!

The Notorious Lady Anne by Sharon Cullen is a great read. Both Captain Addison and Mrs. Sutherland are strong personalities that shout for attention. There is action and adventure abounds in this tale as well as emotion on high. When Nicholas decides he’s going to have Emmaline there is no changing his mind, and the strong and intelligent but very naive young pirate lady has little clue as to what is going on. I thoroughly enjoyed this high seas adventure with a kick and I am looking forward to more from Sharon Cullen. 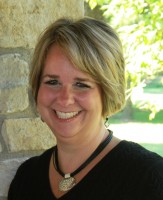 After earning a degree in journalism from Ohio University, Sharon found the stories inside her head were more interesting than what was going on in the world around her. Yet, it wasn’t until years later that she decided to pursue her secret dream of writing a romance novel. Since then she’s been published in romantic suspense, paranormal romance, contemporary romance and historical romance.

Sharon’s other job descriptions include chauffeur, laundress, cook and mediator to her three very busy kids, her husband and two dogs. She lives in southwest Ohio with her brood although her dream is to someday retire to St. Maarten and live on the beach.

The Notorious Lady Anne is Sharon Cullen’s first historical and her debut novel with Loveswept. Look for The Infamous Lord Blythe coming in 2013. Sharon is also the author of romantic suspense, paranormal romance and contemporary romance.

If you’d like to find out more about Sharon and her books, you can visit her at her blog or her website. She’s addicted to social networking so you can find her on Facebook and Twitter. Friend her! Like her! Follow her! She’d love to hang out with you and talk about her passion—books.

Thanks for the review Kimberly.