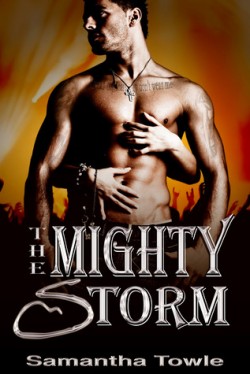 The Mighty Storm
by Samantha Towle

“The Mighty Storm (TMS) is exhilarating, romantic and sexy.” ~Under the Covers

I will admit here and now that I did NOT pick up this book on those stats alone.  I confess that I have become a book cover whore.  I picked this book based on that damn hot cover.  I keep saying I’ve been getting lucky with this tactic but this book is AMAZING and I’m beginning to think its skills not just luck.  *snickers* Joking aside, this book is really good and as far as the cover, that’s exactly how I imagined Jake.  That face, body, tats and down to the stubbles on his face.

That man on the cover IS Jake Wethers to the bone.  The Ultimate bad boy, in fact, Jake is sin incarnate. He is flirty, sexy, tatted, talented, rich and “blessed with a big d/ck”.  Of course Ms. Towle doesn’t make him too perfect.  After all, what great hero would he be without a dark side?  I think Ms. Towle does a great job making her hero with a believable dark side and most appropriate for the protagonist’s status as rock star.  Jake comes from a not so perfect family and over the years he has dabbled with drugs and alcohol.  It’s an issue most rock stars are known for and that stereotype, I think makes the story line very believable.  But let me tell you, he is very sweet and so very romantic. I have fallen for him, dark side and all.

On the other hand, Trudy Bennett annoyed me more than once.  She has known Jake since they were kids and had a fall out when they were younger.  Their path crosses again and pretty much a relationship started.  Well, Tru made some decisions that I don’t agree with. But I quickly overlooked it as soon as Jake came back on the scene. Seriously though, she almost made it to the TSTL list but she did redeem herself in the end.

I think it is fair to warn readers who have issues with cheating.  You WILL encounter that here.  Now, cheating is one of my triggers and I usually avoid books with it as much as possible. However, I thought the angst of the cheating was well done that found myself engaged instead if annoyed, if that makes sense.  I’ll tell you right now Jake and Tru overcomes all the conflicts Ms. Towle throws at them.  It was a struggle but they overcome it.

The Mighty Storm (TMS) is exhilarating, romantic and sexy.  My heart broke a few times but in the end, it left me satisfied, relieved and very in love.  TMS is without a doubt one of my top picks of the year.

She has written contemporary romances, THE MIGHTY STORM, WETHERING THE STORM and TROUBLE.

She has also written paranormal romances, THE BRINGER and the ALEXANDRA JONES SERIES, all penned to tunes of The Killers, Kings of Leon, Adele, The Doors, Oasis, Fleetwood Mac, and more of her favourite musicians.

A native of Hull and a graduate of Salford University, she lives with her husband, Craig, in East Yorkshire with their son and daughter.

Great review Angela! I can’t wait to get to this one, I hope I can deal with the cheating part as good as you did, I love werewolves but I hate dogs, I think men that cheat fall into the second category..LOL

Under the Covers Book Blog
Reply to  Lupdilup (Loupe Duffy)

Loupe, I really didn’t know about the cheating. *hiding face* but it wasn’t bad. I hope you like it. ~Angela

Will have to check this out…thanks for the great review Angela!

Thanks Angela for the review. I’m adding this to my TBR pile now.

The cover is very,very good 😀
I would love to read this book!

Review: Taming the Storm by Samantha Towle | Under the Covers Book Blog