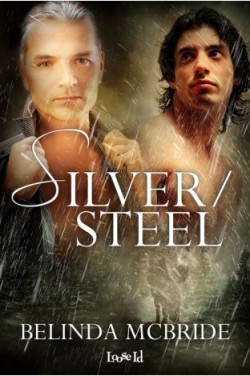 SILVER/STEEL doesn’t sparkle like it’s predecessor, but nevertheless makes for a great paranormal M/M! ~ Under the Covers

SILVER/STEEL is book two in the Arcana series by Belinda McBride. This features Dylan Ryve, a dream hunter and Travis Feris, a shapeshifter.

Immediately, I was intrigued by the idea of a dream hunter. McBride opens the book with an intense scene involving Dylan and his work as an assassin. Impressive and eye-catching, I found myself interested in learning more about Dylan and his work. However, I felt like the beginning wasn’t as explorative as I had hoped.

When Dylan witnesses a shifter being attacked, he steps in, playing the hero. Later, Dylan enters Travis’s fevered dreams, knowing it’s his ticket to getting to Arcana and the pack. In theory, this should have been exciting and interesting, but for me it didn’t stand out too much. It felt a little choppy and didn’t really get into the meat of the matter.

That being said, I don’t think I can say I loved this book as much as its predecessor. There were some good parts, but also some parts that were less than stellar. Along with the confusion, I don’t think I connected that well with Dylan and Travis. Though I enjoyed their romance and their banter, something was missing and I can’t pinpoint it exactly. Something just didn’t click the way Blacque and Bleu did in the first book.

Speaking of Blacque and Bleu, they make regular appearances, as do other members of the pack. It was nice reading about them again and I think McBride has a good series on her hand. Open to a wide array of possibilities, she is able to take this series wherever she wants to go! And I’ll be there along for the ride!

Thanks for the review Ann. I’ve not heard of this series that I remember.

It’s a pretty good series, Lori. Hope you give it a try 🙂