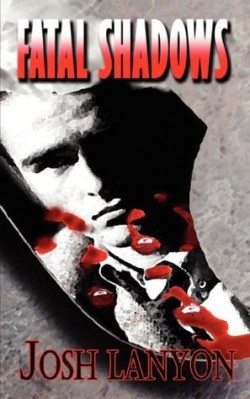 I could do nothing else but read this book in a single sitting and after I was done, I was still thinking about it, which prompted me to rush out and get book two. It’s like crack! ~ Under the Covers

The Adrien English Mysteries have been on my radar for such a long time that I decided to finally take the plunge. Though FATAL SHADOWS isn’t the first of Lanyon’s work I’ve read, it is the first full-length one and it wholly consumed me the whole time I was reading it. I could do nothing else but read this book in a single sitting and after I was done, I was still thinking about it, which prompted me to rush out and get book two. It’s like crack!

Adrien English is a gay bookseller by day and a mystery writer at night. The cops have shown up telling him that his best friend has been murdered. Adrien is receiving creepy phone calls and weird gifts from a secret admirer and senses that someone is stalking him. But the cops actually think he is trying to divert attention from himself as he is one of their prime suspects.

Adrien and homophobic homicide detective Jake Riordan have an interesting relationship. The thing I love about Lanyon’s writing is that he infuses dry humor in the most unexpected places. It works so well because it’s clear that Adrien and Riordan are two opposite. How do you get a homophobic cop and an intrinsic gay man together? Lanyon uses humor to break down whatever barrier stands in the way and by the end of the book, readers feel as if this could be the beginning of something new and special.

I am very intrigued about Riordan’s S/M encounters. That will definitely spice things up and I hope that Lanyon explores Jake’s character more fully. I am desperate to learn more about him!

As for the mystery aspect, I loved it! I was able to figure out the killer early on, but interestingly enough, it never diminished the interest I had in this book. In fact, I think it made me read faster because I wanted to verify if I was right or not.

In the end, FATAL SHADOWS drew me in like beacon. It didn’t let me go until I flipped that last page and I’m sure that it will be the start of a whole new obsession. I’m jumping right in!

I absolutely loved this story, too. I listened to it as an audio book recently, and I keep waiting for the others in the series to be released! It’s driving me crazy!

Under the Covers Book Blog
Admin
Reply to  KathleenC

LOL I just bought the second book yesterday! I may have to try them in audio to see what they are like!

Excellent review, Annie!! So glad you loved it!! 🙂

Under the Covers Book Blog
Admin
Reply to  Leigh

I sooooooooooo loved it, grabbed the next one already and ready to go!

I have this series on my mental list too. Sounds fab!

Oh Sophia you should totally read it! I loved every moment!

Thanks for the review Ann. I’ve read a few of Josh’s books and enjoyed them. I’ll hacve to look this book up.

This is one of Josh’s most popular ones, so I hope you give these ones a shot too!

Thanks for the great review Ann!

Nice review! I haven’t heard about this series, but it sounds really good, I love mysteries! I’m gonna add it to my TBR. Thanks 🙂

Under the Covers Book Blog
Admin
Reply to  Emilia S

Awesome Emilia! Well, I hope you enjoy them as much as I do!