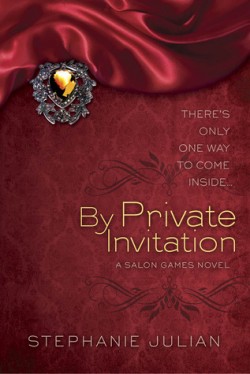 By Invitation Only
by Stephanie Julian

“By Private Invitation is just sexiness.” ~Under the Covers

Smooth, charming and rich as all hell, Jared is considered to be a class A playboy.  He lives life classy, flashy and no strings attached.  As part owner of the Haven Hotel he not only brings his style and charisma to the hotel but his naughty side as well.  By creating one floor known as the Salon for his closest friends where they can explore their most intimate desires, Haven Hotel is considered to be an exclusive good time.  And there’s nothing better to Jared than women, drinks and a good party.  With his New Year’s Eve extravaganza in full swing Jared thinks it will be another night of drinking, socializing and an after party up at the Salon, or so he thinks.

These two are actual grownups with real problems, real jobs and a real healthy appetite for getting it on at any given opportunity, at any given time.  They have a way of making outdoor sex seem sensual and ground breaking without it feeling smutty.  Annabelle and Jared drown in passion for one another; they drip with a raw, animalistic need that just seems right.

But of course no story is complete without its share of some kind of drama and in this case it happens to be their pasts.  Annabelle and Jared are prisoners of their pasts.  But one thing is for sure, they can’t stay away from each other no matter how hard they try.

By Private Invitation is just sexiness.  So what are you waiting for?  Read it!

Thanks for the review – this sounds good