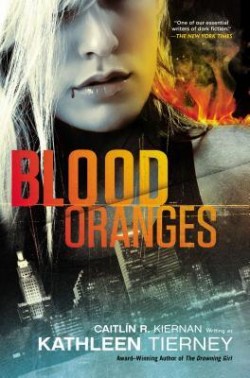 “She’s like a much darker Dani from the Fever series.” ~Under the Covers

Well, to be honest, the blurb is really what drew me to this book. Words like ‘demon hunter’, ‘ex-junkie’, ‘midnight snack for a werewolf’, ‘the vamp took a pint out of me too’ and “So now…now, well, you wouldn’t think it could get worse, but you’d be dead wrong.” really popped for me as well as the sarcasm. I just had no idea how crazy it would be! (And you get a taste of it at the very beginning with The Author’s preface…don’t miss it, it’s hilarious!)

Quinn has been a runaway since the age of twelve and the story of her life is definitely not sugar coated. She’s become a junkie and does whatever she needs to get her fix…including stealing and doing tricks. That’s until everything changes one night when her best friend and make out buddy gets killed by a ghoul. Quinn’s eyes are now wide open and she tells the tale in her own words which are sprinkled with verses from novels (from the hours she spent hanging out in the library) and heavily infused with sarcastic remarks and satire. (She’s like a much darker Dani from the Fever series.)

At the beginning, Quinn was lucky. Demons were killed mostly by the manner of her being in the right place and/or right time or just by accident…she just happen to get all the glory. Things changed when she was bitten by both a werewolf and a vampire. Suddenly, people were after her and she was after others and the action gets amped up tenfold. (I got a kick out of things when she would wake up and could tell who and what!! she had eaten by her vomit….no really, it is kind of funny…gross but funny.)

The paranormals in this book are no way romanticized, in fact, the author does a good job blasting away quite a few notions of any sparkly vampires and alpha males. These paranormals are not pretty and there is quite a bit of blood and gore…and guts and bones…well, you get the picture.

Of course, there is a mystery and some good ol’ backstabbing. Some of the information goes back and forth from the past to present but it was laid out in a very understanding and interesting way.

Quite a good story if you’re looking for a straight up Urban Fantasy novel with a ton of snark. The price is a bit disconcerting but hopefully it won’t cause too many people to shy away.

Thanks Sharon for the review.