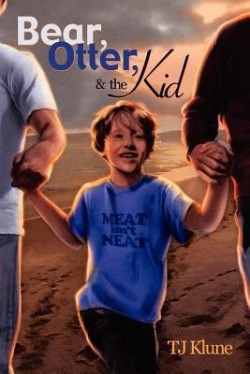 Bear, Otter, and the Kid
by T.J. Klune

Touching and poignant! You can’t fake that type of emotion and Klune manipulates emotion to his whim, taking the reader on a journey that many won’t ever forget. ~ Under the Covers

Don’t look at the title! Or the cover! Ignore those because I know that it may not shout “Read me!” but I can assure you, the title makes complete sense and you’re not really reading about a bear and an otter with a human kid.

Bear (whose real name is Derrick) and Otter (Oliver) have become one of my favorite couples. Their story is one that made me laugh and cry. I definitely don’t suggest reading this book in mixed company because you will laugh hysterically and cry manically like a deranged person with bipolar.

When Bear turned eighteen, his mother left them and instead of a new car, he got sole possession of his younger brother whom they call, the Kid. Abandoned and burdened with a heavy task that no young adult should ever experience, Bear essentially grows up in a day. His best friend, Creed and his older brother, Otter have been helping them in any way that they can but, Bear feels ashamed to lean on them so much.

Despite the hard times, Bear and the Kid get along great and there are moments in this book that will completely melt your heart. That being said, there are also moments when it will crush your heart:

I reach into my pocket for my wallet and pull it out. Inside is a piece of paper I’ve carried for a year and a half. It’s yellowing with age and has ripped in a couple of places from how many times I have opened and read it. I hurl it at him. It bounces off his chin and into his lap. “Read it.”

Otter swore he’d never leave them, but immediately following something that shouldn’t have happened, he left them high and dry without a warning or explanation. Returning years later, the harbored anger  and betrayal that Bear feels returns in full force and readers are caught within the storm as they try to hash it out.

I cried so many times while reading this book, the quote above being the first time. I think the last time I cried this much was reading Kenyon’s ACHERON, and I see some similarities between the two books. Readers sympathize with the main character on a level that goes beyond the pages. The pain doesn’t seem to stop and the self-deprecation just eats and eats at the protagonist.

The secondary characters are smart and funny and have the ability to tug on your heart stings as well. The Kid in particular has such depth to him. Klune has really been able to strike the perfect balance to creating a romance and a sense of family.

There have been some claims to plagiarism and since I haven’t watched the movie in which it was supposedly copied from, I will refrain from stating opinions. But I do think that this story was touching and poignant. You can’t fake that type of emotion and Klune manipulates emotion to his whim, taking the reader on a journey that many won’t ever forget. So, I’ll sign off by quoting the Kid, whose words definitely summed up this book for me.

“… The story was STRONG…And like Mad Cow Disease it will stay with me, for a time that is long.”

When TJ Klune was eight, he picked up a pen and paper and began to write his first story (which turned out to be his own sweeping epic version of the video game Super Metroid—he didn't think the game ended very well and wanted to offer his own take on it. He never heard back from the video game company, much to his chagrin). Now, two decades later, the cast of characters in his head have only gotten louder, wondering why he has to go to work as a claims examiner for an insurance company during the day when he could just stay home and write.

He lives with a neurotic cat in the middle of the Sonoran Desert. It’s hot there, but he doesn’t mind. He dreams about one day standing at Stonehenge, just so he can say he did.

Glad you loved it! I love these guys 4 eva 😀

Under the Covers Book Blog
Admin
Reply to  DarienMoya

They’re awesome, love them! Thanks for the rec! <3

Its on my wish list. I appreciate the warning of what it will do to my emotions.

Thanks Ann for the review.

Sounds like a really good story-thanks for the heads up on this one Ann!