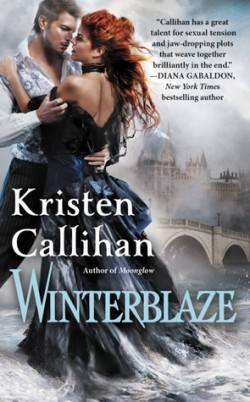 I’ve fallen so deeply in love with the world she has created. It’s so vibrant, so very lush and when you add such well-developed characters, it only makes for a more amazing story. ~ Under the Covers

WINTERBLAZE is book three in the Darkest London series by Kristen Callihan and it’s the best one yet!

If you’ve read MOONGLOW then you know if the discovery and betrayal that Winston Lane experienced at the end. What’s interesting about this book and this couple in particular is the fact that they are married already but something has torn them apart. The question is, is their love for each other strong enough to surpass this obstacle?

Callihan paints a rich background for this story. Set in Victorian London where the streets are gloomy and gaslights are the only source of light, she sets dark paranormal creatures alongside uplifting themes such as love, hope and fate. I’ve fallen so deeply in love with the world she has created. It’s so vibrant, so very lush and when you add such well-developed characters, it only makes for a more amazing story.

Winston Lane isn’t the man we know him as in the previous books. He’s no longer the curious Inspector who wishes to do good. We learn a bit more of his past and his intentions then and we also see a much more Alpha hero. A brutal, life-threatening attack has physically scarred him and in an effort to regain his health, he has packed on the muscle.

Poppy Lane reveals her powers and I must say, I think hers is the most badass out of all the Ellis sisters! What I loved about Poppy in particular is the fact that she is so strong and independent, yet she isn’t afraid on lean on Win when she needs to. She understands that Win is the one person in her life that she can rely on and despite the angst and the hurt that both of them have caused one another, it doesn’t overshadow the love they still share.

Which leads me to my next point about the romance. It’s very strong in this book. Callihan spends some time with flashbacks where readers get a glimpse of Win and Poppy’s first meeting, their dalliances, and some crucial moments to their relationship. I loved these moments because though they weren’t long, they did bring more insight to their relationship. But what’s more impressive is the fact that Callihan does not take advantage of that and simply allow that to be the romance of the story. She spends considerable time building that trust again once the betrayal is revealed and it makes for a more believable and stronger romance in my opinion.

Then there’s the plotting – wow. Brilliantly crafted and executed. Can we expect anything less from Callihan?

I could go on and on about this book. It literally had all I wanted in a romance novel. I’m going to say it now because I don’t think many books can top this read but WINTERBLAZE may be a favorite of 2013. Callihan is a must read!

He couldn’t think of what to say that would not draw himself closer into her orbit. And that was the problem: he wanted to be in her orbit. To be around her was the difference between going through the motions of the day and feeling every breath.

Question – Do I have to have read the first two books? (Other reviewers say “yes”, but I really want to read this one asap.)

Hi Jena! Yeah, I would suggest reading the series in order for this one 🙂

I’m going to have to pull this to the top of my TBR now that I’ve heard so much about this series not only from this sight but from another as well. You’ve intrigued me.

Well, I hope you enjoy Eileen! It’s one of my fave series 😀

I’ve seen a lot of good press on this book. I’m wondering the same thing as Jena can it be read as a stand alone book?
Thanks for the review Ann.

Lori, I would probably suggest reading the series in order. All the books have been fantastic ones so I don’t think it would be a hassle at all. Enjoy!

Thanks. I thought I might so I got it at the library today.

Awesome! Let me know what you think!

Especially for this book, you have to read at least Moonglow first. A lot happens in that book which is the basis for Winterblaze. *happydance* Amazon just shipped my copy and I can’t waaaaaaait!!!!! 🙂

Yes, I agree Erin! I can’t wait for you to read it! You’ll love it!

Oh, I adore this series too. I can’t wait to find out what happens next especially because of who the h/h are going to be.

Ah yes! I was very intrigued about Win and Poppy after reading the last book. Win turned out to be a stud and Callihan wraps this one up SO WELL! Makes me eager for the next book! I want it badly!

I’ve had the first one in this series sitting on my shelf TBR…gonna have to get to it sooner than later. Thanks for a great review! 🙂

Thank you, I hope you enjoy this series as much as I have! Darkest London has become a huge fave of mine!

Great review – i can’t wait to read this series

Ann you’ve definitely sold me on this series, I’ve got the first book on my tbr pile!

Woot!! Then I hope you enjoy, Timitra!

I’ve seen great ratings and comments for this series,sounds promising!
And the covers is wonderful!

Thanks for the great review Ann! 🙂