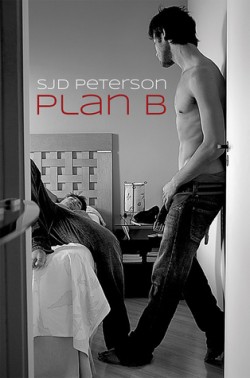 Plan B
by SJD Peterson

“It was full of great sexual tension, just the right amount of angst, and even a little heartbreak – all of which made the HEA that much sweeter.” ~Under the Covers

PLAN B is a wonderful story of attraction, friendship, secret love, heartbreak, and starting anew.  Danny is a flamboyant gay 20-year old drama major who loves to wear gorgeous, smoky eye shadow and 6-inch stiletto boots, but as he says, he doesn’t “hide behind the flair.”  He is out and very proud of who he is.  While accompanying his best friend, Bo, to a frat party, he catches the eye of Lance, big buff football player, who is flat out rude to Danny.  Nonetheless, Danny can’t stop thinking about Lance’s mesmerizing, gray-eyed piercing stare.

The same is true for Lance as well, who seeks Danny out on campus and tries to get to know him better, apologizing for his behavior at the party.  To make matters worse (or better, depending on who you ask), Lance is the twin brother of Katie, the girl that Bo just started dating.  Lance uses that as his excuse to get closer to Danny.  With time, their initial attraction for each other only intensifies, but there’s an obstacle…Lance has barely come to grips with himself that he might be gay.  He knows he’s attracted to Danny, but is it because Danny has feminine qualities?  Danny is willing to be Lance’s closeted experiment, but he makes sure that Lance knows what he is – a man – and not what he thinks Lance pretends him to be – a chick.

Before long, their attraction to each other develops into some seriously hot sexy time, friendship, and admist all of that, more than just lustful feelings.  The problem is Lance has only one plan for his life – to play in the NFL.  There is no other option, no plan B, and because of that, coming out of the closet does not fit into his plan.  Complicating matters further, Danny realizes this at the same time he realizes he has fallen hard for Lance.  So what’s left for him to do?  Guess you gotta read it to find out. 😉

I love the gay-for-you/out-for-you trope in my m/m romance, and Peterson definitely delivers that well in PLAN B.  She also writes wonderful characters.  Although he can be quite conceited, Danny is just fabulous.  Even at such a young age, he is confident in who he is, embraces it, and makes no apologies for it.  While Lance is not ready to out himself publicly, I give him props for making baby steps in acknowledging it.  I really enjoyed watching their relationship grow as well.  It was a great progression throughout the school year.

There were a few issues with this book that prevented me from giving it more stars.  First, the editing (both content and grammatical) could have been better.  It wasn’t completely distracting, but I did get caught up on some errors every here and there, and with a closer review and editing eye, that wouldn’t have been the case.  Lastly, while I was very happy with how the book ended in general, I felt like there were some questions that were never answered, or that could have been developed further.  I will try not to be to give away too much here, but be warned that these questions are somewhat spoilerish.  I wanted to learn more about Lance’s life after college – Did he have any relationships other than his attempt with Morgan (specifically, did he ever have any trysts with any other men)?  While his eventual Plan B involved Danny, what did he decide to do for a living?  I felt like this type of information was just glossed over, and I would liked to have seen more.

Overall, though, I really did enjoy PLAN B, so much so that I was hooked and read it in the course of one day.  It was full of great sexual tension, just the right amount of angst, and even a little heartbreak – all of which made the HEA that much sweeter.

I love SDJ Peterson. I look forward to reading this one.

Y’all are very welcome! It was a very enjoyable read, and I, too, just love SJD Peterson! Great writer!