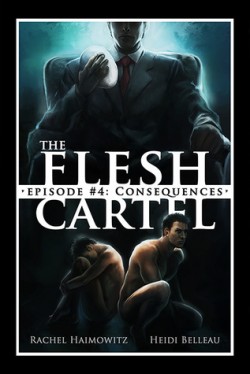 “Yes, it is a mind fuck for Mat, Dougie, and the reader as well.  Kudos to Haimowitz and Belleau for being so damn good at their craft!” ~Under the Covers

Well, here we are with episode #4 of the Flesh Cartel, the psychosexual serial, and this episode, CONSEQUENCES, truly enveloped the “psychosexual” aspect of the series.  In the previous episodes, we have seen so many dark aspects of human trafficking at play – kidnapping, rape, torture, brutality, and mind games.  But I think this episode truly embraced the mind games part so very, very well.

In this episode, Mat and Dougie are still at Nikolai’s house, as he has begun training them for his clients.  In the previous episode, Nikolai begins to “teach” them that they have choices (ha!), but that their choices also have consequences.  We see a little bit of Mat in this episode, and he continues to be head strong, fighting still for both his pride and for Dougie.  After the tortuous consequences he received in CHOICES, though, he seems better inclined to make the “right” choice, but his mouth still gets him in trouble.

Nikolai is very focused on Dougie in this episode.  He wants to teach him that if he submits appropriately, he can be rewarded greatly.  But right now, this reward only appears as in the form of great sexual pleasure.  While Nikolai believes that the rewards of submitting appropriately are so much more than that, I just cannot agree.  And as much as it is comforting (for lack of a better word) to see Dougie receive pleasure for the first time in a long time, it is equally horrific, for he is still being raped, just not with the brutality as before.  And of course, he is at such odds with it all since he loathes what it happening to him, but is still able to experience tremendous physical pleasure.  It is a mind game – a mind fuck, if you will – of such epic proportions, and my heart just continues to break for him.  I almost don’t know what it worse – the brutality he received in earlier episodes, or the fucked up “caring” he is receiving now.  It truly is a toss up.  Yet, I find myself rooting for him to make the “right” decision so that he doesn’t have to suffer the seemingly worst consequences for making the “wrong” choice.  *sigh*  Yes, it is a mind fuck for Mat, Dougie, and the reader as well.  Kudos to Haimowitz and Belleau for being so damn good at their craft!

Another part of this episode that is bothersome is watching Nikolai repeatedly use words to break Dougie down, and not just with threats.  But twisting events of his life in such a way that maybe one day, with enough repetition, and enough positive consequences delivered by his own hand, that Dougie just might start to believe him.  And of course, it is all self-serving lies, and while Dougie as a psych major understands this, there will come a point I think, that he will start to doubt himself and believe Nikolai instead.  Nikolai really gets to the heart of it (in his mind) with this quote:

So, as I said at the outset, this episode truly plays on the psychosexual aspect of this series so very much.  Eerily so – to the point where I feel like I really do have my own mind game going on.  With each release, I loathe to read more of the abuse that Dougie and Mat have to endure, yet I am so engrained and fixated on the series and these characters, that I devour each episode the moment I get my hot little hands on it, and can’t wait until the next one.  Haimowitz and Belleau clearly know their stuff if they can keep drawing in the reader for more torture. But like Mat and Dougie, I continue to have hope.  Nikolai, though, has this to say about that:

“Hope,” Nikolai told him.  “You hope for things.  Hope is a fool’s game.  Hope will only break your heart.”

Yet, I will continue to keep my hope alive, for the boys, and for me as a reader, because if I lose all my hope, then what’s the point, right?

Next episode up is called WINS AND LOSSES.  Bring it!!

I don’t think I’ve read any book quite like this so thanks for the heads up on this Leigh!