The Romance Reviews is hosting the Romance Madness Hop and Under the Covers
is happy to be participating! This hop will run from January 25 thru January 29.

The Romance Reviews has asked us to feature a romance book we love and we are most excited to be featuring EDGE OF DAWN by Lara Adrian.  The 11th book in the Midnight Breeds series was one of our most anticipated reads of 2013 and it marks the beginning of a new era in the series.

Twenty years after the terror of First Dawn—when mankind learned that vampires lived secretly among them—the threat of violence reigns as the two species struggle to coexist. The only group preserving the fragile harmony is the Order, an elite cadre of Breed warriors dedicated to protecting humans and vampires alike. And in this precarious world of torn loyalties and shattered trust, Mira, a fiery squad captain, finds that every fight bears an intensely personal cost.

Raised among the Order, Mira has always believed in the warrior’s code of swift—and even lethal—justice. But the one thing she desires more than the Order’s hard-won acceptance is Kellan Archer, a sexy but troubled Breed fighter. In love with him since childhood, Mira once broke through his tough exterior during an unexpected night of rapture, but the next day he mysteriously disappeared, never to return.

Kellan didn’t think he would ever see Mira again—or have to confront the truth of why he left. After abandoning the Order years ago, he now leads a band of human rebels intent on carrying out their own vigilante rule of law. Yet a high-profile kidnapping assignment brings him face-to-face with the past he sought to avoid, and the striking woman he has tried desperately to forget. And as tensions mount and the risk of bloodshed grows, Kellan and Mira must take sides—between the competing missions that dominate their lives, and the electrifying passion that claims their hearts.

Instead of thinking of ANOTHER book to give away,
we have a special treat for you.
We have a print ARC of EDGE OF DAWN looking for a good home. 😉
How sweeeet is that?
After that grand prize winner, we’ll select 10 winners to receive a set of Midnight Breeds bookmarks (including the latest EDGE OF DAWN bookmark) and a Breedmate tattoo.

This contest is open internationally 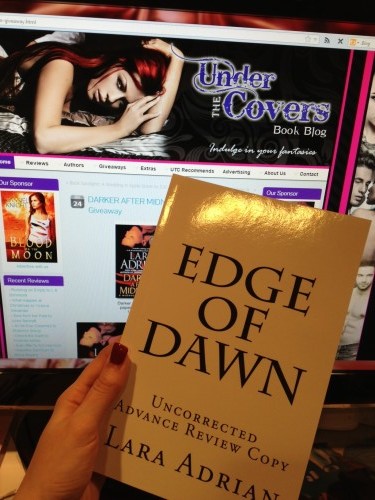 Now that you’ve entered our awesome giveaway, then continue hopping!  By clicking the button below you will sent to the next blog in the hop.

I am looking forward to the new RJ Scott books.
Yvette
yratpatrol@aol.com

thanks for the blog hop!

To be honest – I don’t know if I have one for Feb. I’m looking forward to the next Chloe Neill Chicagoland Vamp book though

Edge of dawn because i love lara adrian books! thank you a lot for the international giveaway

I am from Germany and in February the new book from J. R. Wards Black Dagger Brotherhood will be released.
And from Nalini Singh and of course Lara Adrian!
Those 3 are my absolute favorites, i cant put their books down.

Thanks so much for this giveaway! There are not so many international giveaways and this one is so amazing!

Hot Ticket and Edge of Dawn are at the top of my February reads. Hot Ticket because I adore this series and I have been biting my nails trying to keep from reading Double Time so that I can read them in order so it is actually a two-fer release month for me!!! And Edge of Dawn because I am excited to see where Lara Adrian takes this series after the way Darker After Midnight Ended.

Frost Burned is my most anticipated release, but I think it comes out in early March, not February. Nalini Singh has a book coming out, though, right? It’s tough to pick just one…

I’m looking forward to Edge of Dawn by Lara Adrian because it’s the Midnight Breed series that got me back to reading, and I can’t wait to read Mira’s story !!!

Can’t wait to read thus book.
Thanks so much for this giveaway!

I am an absolutely crazy fan of this series! I even have a Breedmate mark tattoo 🙂 I can’t wait to read Edge of Dawn & meet the next generation!! Thanks for hosting the giveaway

I don’t think I’m looking forward to anything specific in Feb, but in March I’m excited for Grave Secret by Sierra Dean

Checking my wish list I didn’t find one for Feb but March 5th brings out the next Mercy Thompson novel!!

I am looking forward to Lara Adrian’s Edge Of Dawn.

Forgot to say the why. I loved Exquisite and the character in the coming book Entice was great and I loved her in book 1 so am looking forward to her story.

looking forward to so many– but I think Hot Ticket is on the top of the list.
modularmates(at)comcast(dot)net

I am looking forward to the new RJ Scott books.

Any new one lol

Besides Edge of Dawn, I can’t wait for Indigo Spell by Richelle Mead.

I can’t pick just one book, how about some authors? Kathi S. Barton, Carrie Ann Ryan, J.R.Ward, and on and on and on….. Thank you for the giveaway.

This sounds like a fascinating read. Thank you for the opportunity to win it.

Edge of Dawn is definitely a hot favourite, because I have followed this series from the beginning and this was one of the first five PNR series that I read.
I just love Vampires, and I have pre-ordered every new release in the Midnight Breed series since purchasing Kiss of Midnight!
A Howl for A Highlander is a close second by Terry Spear, because she introduced me to Werewolves!!!

Lisa Kleypas’s Crystal Cove.
Thanks for participating and the opportunity.
Carol L.

Lisa Kleypas : Crystal Cove. This is a fabulous series and the books keep getting better then the last.

Edge of Dawn sounds really good to me.

I am looking forward to Hot Ticket by Olivia cunning!

Beauty Awakened by Gena Showalter because I love her books!

Definately Edge of Dawn. I absolutely love this series and I want to see what has happened since the vampires revealed themselves. Thanks for this giveaway.

The newest BDB book of course because I am hooked on the brothers. LOL
Thanks for being part of the hop and for the chance to win.
reneebennett35 (at) yahoo (dot) com

I think this might be the book I would be looking forward to.
jeepforme1923(at)yahoo(dot)com

Is “The Collector” coming out in Feb? I’ve been DYING to read that! So many people have talked about how addictive the book is. Can’t wait!

Thanks for the giveaway! Mestith@gmail.com

Edge of dawn because it sounds intriguing

Frost Burned is my most anticipated release!! I love this series, and can’t wait to read new book about mercy thompson.
Thanks for giveaway 🙂

EDGE OF DAWN- I have been hoping for Mira’s story for a long time. sdylion(at)gmail(dot)com

Love this series. Can’t wait to read this one.

Calculated in Death by JD Robb, I know it’s not paranormal but I enjoy this series so much!

I can’t wait for Maya Banks’ Rush, Lauren Dane’s Going Under and Olivia Cunning’s Hot Ticket….my auto-buy authors. Thanks for the giveaway.

There are so many new books comung out. Its hard to think which one. They all look so good to read including this one. Thanks for the giveaway.

Silent Cravings by Jess Haines because it will hold me over to the next book in the series comes out this summer.

Edge of Dawn , because I love this series.

There are so many but I want Hot Ticket by Olivia Cunning, I just love those Sinners men. Thanks for the reviews and excerpts there are so many new additions on my TBR! Thank you for the chance to win 🙂

Immortal Ever After: An Argeneau Novel
Because I haven’t missed any of the Argeneau books 🙂