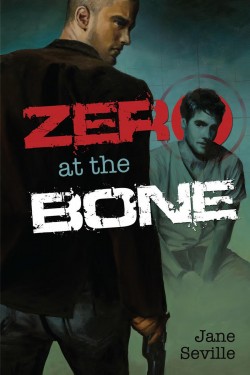 Zero at the Bone
by Jane Seville

I’ve been on a little M/M streak lately and decided to finally jump into ZERO AT THE BONE. I’ve been meaning to read this book for a very, very long time and when Leigh further recommended this book to me, I figured that today would be a good day as any.

D is a hit man hired to kill Dr. Jack Francisco, a witness to a murder that occurred as he was heading home from the hospital. In the days before the trial, all hell breaks loose as several assassins are targeting one another and people are getting trigger happy. Violence isn’t a stranger to this book and I think that it definitely gets the reaction that the author wants. My heart pounded as I read, and in addition to the plot twists, the romance also gave me something else to get excited about.

ZERO AT THE BONE has swiftly become one of my favorite M/M romance books. And to make this review a little more special, our regular guest reviewer and fellow M/M addict, Leigh is here to chat with me about it!

So Leigh, what were your thoughts on ZERO AT THE BONE before you started it and how did those thoughts compared to how you felt after you finished the book?

Leigh: Hi, Annie!  Well, when I immersed myself in the m/m romance genre about a year ago, “Zero at the Bone” and “Jack and D” were phrases that I kept hearing repeatedly.  Zero was highly recommended by so many of my friends, and the love that surrounded Jack and D as a m/m couple was quite astounding.  So I added it to my TBR list and finally decided to give it a go just a couple weeks ago.  And OMG, am I ever so glad that I did!  I  absolutely LOVED it!  The book was simply amazing, and just as everyone had told me, Jack and D are completely iconic of couples in the genre.  Just as a little background, I rarely read book blurbs because I love going into a book blind.  I like being surprised by what I am about to read, and I just hold onto faith that so many high recommendations won’t steer me wrong.  Well, my expectations, while high, were still blown out of the water, and I couldn’t have been more thrilled!

Annie: Word travels fast and when there’s a good book out there, I want to read it. Now it’s taken me awhile to get to it but I think the book does live up to its hype. There’s a lot of suspense, a lot that drives this book forward other than the spectacular romance and I think it’s a thrill ride that no fan of M/M romance should miss out on. It has the appropriate amount of angst and a ton of action and heart.

Of course, I want to ask you about D and Jack! Don’t you just love them?

Leigh: YES, YES, YES!!!  They have easily become one of my most beloved m/m couples.  There are so many reasons to love these two men, both separately, and of course, then together, and I absolutely loved watching them grow into their relationship.  Of course the circumstances of their pairing just draws the reader right in…I mean, you have two men who are so completely different – one a doctor, saving and improving lives, and the other an assassin, taking lives away.  But there is so much commonality once you scratch under the surface, and to watch them grow from strangers into semi-friends into lovers then into the best of friends, was just **sigh** wonderful.

Annie: At first, I wondered how D and Jack would be together. Like Leigh mentioned, they are so vastly different. However, I believe that it’s because of those differences that really make them fit so well together. I loved how Jack prods at D until he reaches that soft center of the steeled man. So much is riding on the fact that despite the way D initially treats Jack, Jack never turns away from him or gives up. They are simply beautiful together.

People are going to want to know about the intensity of sexiness of this book. How would you describe it?

Leigh: Hmmmmm…in one word: HAWT!!!  In many words: the sexiness of Zero and the chemistry shared between Jack and D were both so very intense, and so very, very sexy.  At first, their sexuality is just erotic as all hell.  Their chemistry is so strong and potent, and the rawness of their carnality just flows directly from that.  But then, once their relationship begins to change into something more than just lust and attraction, their sexuality begins to morph as well.  It becomes something so beautiful to behold, and so endearing, all the while never losing that strong attraction and intensity.  In fact, the intensity only gets stronger.

Annie: Yup! You said it. HAWT. It’s nonstop romping filled with emotion and passion. The sex scenes are very well done and I feel like it only displayed and strengthened the bond that D and Jack forged throughout this book. So amazing!

What makes ZERO AT THE BONE stand out for you against all the other books in this great genre?

Leigh: For me, Zero definitely stands out as one of the best books I’ve read in the m/m genre.  First, I think the circumstances surrounding Jack and D’s pairing really wrapped me in.  I honestly was hooked from page one.  We meet D, an assassin, and see him do his work, quick, cold, and calculated.  Then we meet Jack, a doctor who witnesses a murder and has to go into the Witness Protection Program in order to keep him safe from the mob prior to testifying at trial.  D, who chooses his contracts, is put in a situation where that choice is taken from him, and Jack is to be his next victim.  We see that there is more to D than being a cold-hearted killer, though.  And obviously, he chooses not to kill Jack as he is supposed to do.  In running from the various parties who are after both men – the mob, the government, and someone else who isn’t revealed until the end – they basically become forced roommates as they are living together on the run for a couple of months.

Second, I just loved both men and who they were, separately.  D is alpha to the core.  He lives life on his own terms, has accepted the cards that life has dealt him, and is unapologetic about who he is and what he does.  But there is SOOO much more to D than meets the eye.  Then there is Jack, a doctor who has a hit on his life.  Instead of cowering when confronted with that situation, we see the strength of his backbone and will.  And Jack is that one special person, through his curiosity and intelligence, that starts to break through to the core of D.  Even when D doesn’t want to engage, Jack never relents. He, too, is unapologetic about who he is.  The different, yet similar, strengths of both men are so very sexy to me.

Third, Zero definitely stands out as one of the best to me because of how well developed both the characters and the plot are.  Seville writes a long book – much longer than most in the genre – and takes her time to fully develop a believable relationship between Jack and D.  There is no insta-love here (thank God!); their relationship is hard fought and hard won.  And I wouldn’t have wanted to miss a minute of that.  And while we get to watch their relationship grow, Seville progresses the engaging plot that is more than just their relationship.  It’s about them running in order to keep safe, and doing whatever they need to do to keep themselves, and each other, alive.

Annie: This book has two of the most amazing and well-fleshed out characters I’ve read in a long time, not just in M/M romance but overall. I think Seville killed it when she created D, a hit man with a heart. She was able to create a balance where D was scary and defensive, while also having his vulnerabilities. On the other hand, she created Jack who handles D SO WELL. The book wouldn’t be half as good as it is without Jack in it.

As you can tell, we really enjoyed this book! Any final thoughts?

Leigh: Well, if you haven’t guessed by now, I think this was a 5++++ star read for me.  I was fully engrossed from the first page, and even though it was a long book, I didn’t want it to be over when it was.  Jack and D hold a very special place in my heart, and I will be re-reading them many, many times.

Annie: I’m going to give ZERO AT THE BONE 4.5 stars. Not fully 5 because I thought some scenes dragged on for too long and the first sex scene was just OK for me. But this book kept me up all night and I’m sure I’ll be returning for another reread. Or two.

Thanks Leigh for chatting with me!

Want more? The author, Jane Seville has written a few shorts available for free on her website. They are just more glimpses into D and Jack’s like after the events of ZERO AT THE BONE. It’s great for fans who are looking for more.

“Jack,” he whispered, drawing back to look in his eyes again.  “You been the fullest, luckiest blessin’ a my life,” he said, seeing tears drip onto Jack’s upturned face.

Jack was clutching handfuls of D’s shirt, “I love you,” he croaked.

Annie’s pick: (mine is actually from the Time After Time short!)

“There’s you and then after you there’s death, got it?”

Jane Seville is an author living in Columbus, OH. She enjoys reading and writing about good-looking men doing naughty things to each other. She grew up around gay men; her mother directed the local gay men's chorus. Then she went off to a women's college, where as you might guess, she was surrounded by gay women. Despite not being gay herself, Jane has always had a deep connection to the gay rights' movement and continues to do whatever she can to help its advancement.

I’ve been wanting to read this for the longest. Need to get to it ASAP. Lovely review chicas!

Under the Covers Book Blog
Author
Reply to  Amanda C.

Oh this sounds good thanks for the review guys. Going to amazon now.

This book swept me off my feet too. All those story shorts afterward are great and make me impatient for the next installment.

Wasn’t it so great!? Such a thrill ride the whole way through! Glad you enjoyed it!