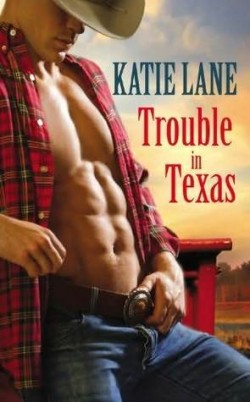 Trouble in Texas
by Katie Lane

“This is not my first visit to Bramble, Texas and I guarantee, it won’t be my last!” ~Under the Covers

Elizabeth Murphy, an uptight librarian, is known as the old maid of Bramble, Texas. She is also the secret and reluctant owner of the rundown Miss Hattie’s Henhouse—the most famous  whorehouse in the state. Closed off and repressed, Elizabeth spends her days hiding behind shelves of books and frumpy clothes. And even though she is only thirty seven, she is more than happy with her loveless and boring life. Her mother had convinced her that men are a waste of time.

Until she gets a call from one of the old hens, the nickname for the ladies who once worked for
said house of ill repute and is still living at Miss Hattie’s. Told it’s an emergency, Elizabeth
rushes out to Miss Hattie’s. Where she finds the hens have chained a naked and wounded man to Miss Hattie’s bed.

The man happens to be Branston Cates. Branston who is Obsessed with the Cates Curse and
solving his great-granddaddy’s murder so he can free the family of the curse, Brant showed up
at Miss Hattie’s hoping to find answers. What he finds instead are three little old ladies, one of whom is holding a loaded gun. After an unfortunate coughing fit, Brant finds himself shot, drugged, and then handcuffed to a bed.

Brantson Cates is a man who has known loss and heartache and loves his family greatly. But
he can also be cold and calculating even Ruthless. And after an unexpected encounter with
Elizabeth, while he was cuffed and not in his right mind, the librarian finds herself on his bad side, Which, I must say, is not an entirely bad side to be on.

Elizabeth and Brant were such a hoot. I love the way that Elizabeth sweeps into Brant’s life and
riles him up. It’s funny and heartwarming watching these two bicker like an old married couple.
And, yeah, I also love that it led to some seriously hot and sexy times.

Henhouse Rule #27: An angry cock is better than a passive one.

And we can’t forget the old hens themselves—Minnie, Baby, and Sunshine. The old gals might
have scared me out at first, but they wear on you and have you laughing right along with their
outrageous antics. Who wouldn’t adore three crazy old ladies who spend their days in lingerie
and have a penchant for chain-smoking and match-making? They warmed my heart something
fierce.

This is not my first visit to Bramble, Texas and I guarantee, it won’t be my last!

Which didn’t explain why Brant remained outside with Elizabeth, even when he started to suffer
from heatstroke. Or maybe heatstroke was only the excuse he used for what happened next. With
one eye pinned on Elizabeth, he stripped off his shirt, something he rarely did, and proceeded to
perform feats of strength. He moved large rocks for no good reason, grunting as if he were leg-
pressing a good five hundred pounds. He welded hedge clippers like Edward Scissorhands. And
hoed like a lumberjack bent on clearing the Sierras.

It was heatstroke. It had to be. There was no other way to explain a thirty-eight-year-old man
flexing and posing for a woman like some goddamned body builder in a competition.

And the worst part about it was she didn’t even pay him the slightest bit of attention.

Katie Lane is the USA Today bestselling author of the Deep in the Heart of Texas and Hunk for the Holiday series. Katie lives in Albuquerque, New Mexico, and when she isn't writing, enjoys reading, going to the gym, golfing, traveling, or just snuggling next to her high school sweetheart and cairn terrier Roo.

I love this series ….love the town of Bramble too:)

I’m so excited this book is out. I have read all of Katie’s books and they’ve been great. I highly recommend them.

I read the first book in the series & the e-novella, but haven’t gotten to the rest yet. Thanks for the review & inspiration to read the rest of Katie’s books!