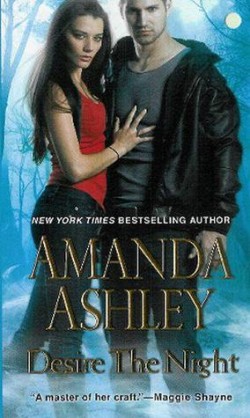 Desire the Night
by Amanda Ashley

This book takes us on a roller coaster ride of action and emotion. It is fast paced and a delight to read. ~ Under the Covers

This book takes off running from the very beginning. Amanda Ashley does not waste any time getting straight to the good stuff. I swear so much happens in this book it’s like two or three books in one. There are no really big epic battles but there is plenty of turmoil and strife to keep you entertained from beginning to end.

Gideon and Kay find each other early on in the book and fall into their romance pretty quickly; however, it doesn’t feel like insta-love.  These two go through a lot together in a short period of time which makes it feel like a true meaningful romance has occurred, if just a bit expedited due to both of their captures and then subsequently being hunted by different factions. I love how these two were together. Gideon was supportive of her and was willing to put himself in danger to make sure the Kiya would be ok. He always came to her rescue but also understood that there were just some decisions that she has to make for herself. Kiya was the same with Gideon; she was fiercely protective of him and valued his opinion. He is the most important thing in her world, so important that she is willing to disobey her Alpha who also is her father to be with him. This causes a great deal of trouble for both Kiya and Gideon.

The witch that took Gideon will stop at nothing to get him back, including kidnap Kiya to force Gideon into her servitude again. Kiya is also “engaged to be engaged” by the jacka$$ son of the neighboring Pack.  He was such a complete douche there is no way you wanted Kiya in his clutches.  She is being forced into the marriage by her father, because he wants a solid alliance with that pack and he does not care what Kiya wants. Kiya’s father was such a good villain! I could not stand him; I wanted to kick him in the dingaling so many times. His forcing of Kiya into marriage causes a great deal of the strife in this book. As the witch is hunting Kiya so are her father and her future husband causing Gideon and Kiya to take some drastic measures.

This book takes us on a roller coaster ride of action and emotion. It is fast paced and a delight to read. By the time I was halfway through the book, I couldn’t believe I was only half way through, so much had happened already and I couldn’t imagine what else we would be in store for.  Ms. Ashley did not disappoint and plenty happened in the second half keeping the rollercoaster going. Even with all of the conflict going on we still got a solid romance out of Gideon and Kiya, which thrived throughout the book. I also really liked the ending, I thought it was appropriate and the right choice.

Wow…this sounds amazing! Thanks for the review

Thanks for the review Amanda.