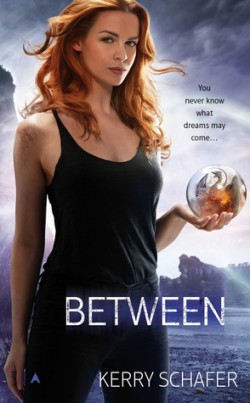 Between
by Kerry Schafer

“The premise of this book is extremely interesting.” ~Under the Covers

“Oh my! Look at the pretty cover!”  Yes, I have the attention span of a kitten sometimes and it takes something like this beautiful cover to catch my eye.  And although I think it’s beautiful and eye catching, I think it may be just a tad misleading.  First because I thought this was a young adult book (that’s what the cover looks like) and it’s not.  Then I’ve seen this book classified as urban fantasy, which technically is, and it really didn’t get there for me either.  So I’m putting this on my Fantasy shelf because it read mostly like a fantasy story.

The premise of this book is extremely interesting.  There’s a dreamworld, a wakeworld and the Between.  Vivian, our heroine, doesn’t know anything about it or that she has the ability to move between those worlds by having a sphere.  And she might be a bit more than that.  But all of this doesn’t come into her life until her grandfather dies, leaves her clues as to what she is and what she needs to protect and is chased by a bad guy….errrr girl.

In what most people consider an urban fantasy series, I usually expect to find a strong heroine lead character.  One of the things that disappointed me about this story was Vivian.  She’s a doctor, so you think she should be smart.  But she is the less kick butt heroine I’ve read in a while.  She went through this book letting this happen to her (and there were some quite uncomfortable at that).  I was hoping that by the middle of the book she would get the hang of things and start understanding what was happening and fighting back, but that really didn’t come until the end.

I guess I shouldn’t ask so much of her.  I was quite a bit confused myself by the world jumping we had in the book.  The transitions between Dreamworld, Between and Wakeworld were a bit vague and I found it hard to keep up on which world we were in until a little while in.  I hate having to re-read paragraphs to figure out what just happened.

Two characters I really loved were Zee (the hero) and Poe (the penguin sidekick).  Although I liked Wakeworld Zee the most, and we don’t get to see a lot of him, even his “other” self was a strong hero, willing to die to help Vivian out of the situations she found herself in.  And Poe was just funny and cute.  I can even give an honorable mention to Jehena, yes the bad girl of the story was pretty kick ass and I might’ve been rooting for her at times.

Another thing I liked about the story was that there are dragons in this world, and they’re not necessarily the hot, good guys.  They were mostly trying to eat Vivian.  Great twist on a character we often read about in books as the opposite.

That being said, although I think this series has a lot of untouched potential because all the key elements are there and the originality of the story was amazing, I was overall a bit disappointed.   This being Kerry’s debut novel, I will probably continue to read the series to see how the author settles into her writing style and develops what could be an interesting series.

Lol @ your attention span of a kitten comment…love the cover for this book!