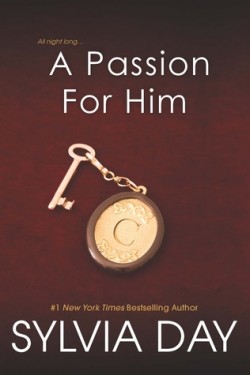 A Passion For Him
by Sylvia Day

“Sylvia Day is a brilliant writer with a unique gift for storytelling.” ~ Under the Covers

Amelia Benbridge still mourns for her childhood sweetheart, Colin Mitchell, who died protecting her. Years later she is practically betrothed to the Earl of Ware, who knows Amelia is still in love with Colin, but also knows they are the suited for one another, even if it’s not a love match he is determined to have her. Ware bides his time until Amelia is ready for marriage. He stands by as a friend to her as she continues to pine over her lost love, day by day attempting to convince her they are meant to be because no one knows Ware like Amelia does.

When Amelia comes face to face with a tall dark and masked stranger at a party, she is intrigued and drawn to him. Count Reynaldo Montoya approaches the beauty and Amelia’s world goes off-kilter. She struggles with her attraction to him, her guilt over possibly betraying the Earl of Ware and her memory of her true love, Colin. Ware is patient with Amelia, as he has been for years, but he doesn’t want to be an after-thought to her.

Colin Mitchell, AKA Count Reynaldo Montoya did not die all those years ago, he did in fact disappear to make his fortune. Colin was a gypsy stable boy and believed himself far below Amelia’s station. All the time with Amelia in his mind and his heart, Colin believed he was doing what’s best for her, for he has never and will never love another, but Colin has trouble following him from France. While attempting to find his way back to Amelia, Colin is accused of murder and is now being pursued for retribution. He knows well that there cane be no future for him and Amelia with this hanging over his head. Colin is not even sure that Amelia will accept him when she discovers that he did not die and has purposely stayed away, allowing her to remain in a perpetual state of grief.

Sounds great! Thanks for sharing about the book, Kimberly.