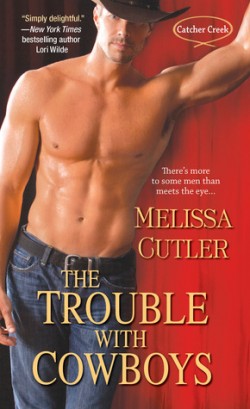 The Trouble with Cowboys
by Melissa Cutler

“Ms. Cutler delivers, not only a sexy cowboy hero, she also delivered an enthralling story line” ~Under The Covers

This is my first read from Melissa Cutler and it will not be the last.  I have to admit that I picked this book up on a basis of just looking at the cover. I’m lucky I landed with a good book because I just
should not decide on that reason alone. But hey, true to the cover, Ms. Cutler delivers not only a sexy cowboy hero she also delivered an enthralling story line.

Amy Sorentino of the Ultimate Chef Showdown has returned to her small town home of Catcher Creek. After losing the contest to her Ex-jerk-boyfriend, she decided to go back home to help her sisters save their family land. With the plans to turn their property into a Bed and Breakfast type of business, meeting with the owner of the best cattle ranch is inevitable…for the best piece of meat, of course.

I love Amy. With her, there are no pretenses. What you see is what you get including her emotions and decisions that go with it. She totally made me laugh with her rule of NO COWBOYS. Due to her past heartaches, she has become cynical and avoids cowboys like the plague.  However, her attraction for them, especially Keelan was unavoidable. Her inner dialogue trying to avoid him was hilarious. On the other hand, Keelan was just straight up with how he felt. His sexual innuendos made it even harder for Amy to resist. Their sexual tension was so obvious and totally off the charts. But it wasn’t just that, they complimented each other and they seem to solve each others problems.

The subplots were a great addition to the story and the rest of the characters were intriguing. With financial hardships, the Sorentino sisters’ argued and irritated each other.  However, with each
confrontation they seem to find the “sisterhood” and in the end, working things out. A few more stories brewing in the background with Vaugn (Keelan’s BFF) and Rachel (Amy’s sister). Jenna (the other sister) and her son’s story was vague but I’m totally curious to see what’s up her…I mean, what her story is all about.  Sloan, Mr. Dixon and Lisa looks like will be a permanent part of the sisters’ lives.  I hope to read more of everyone in the next installment scheduled to release
October 2013.  Rachel’s story!!!

I love a good Cowboy romance! Thanks for the heads up. 😀
I’m loving the plot, I’ll have to see if I have room for this in my schedule. 😉

I really liked this one!! thanks Niina ~Angela

Thanks for a great review, just love a good Cowboy read, going to add this to my TBR list now.

Annette, me too. They are just too hot!!! ~Angela

Thanks for the review! I might buy this for the cover alone 🙂

I totally agree but the story is good too. LOL thanks ~Angela

Thanks for the review, love a good cowboy book, will have to add this to my TBR list.

New author to me. Thanks for the review.

Angela,
I love a good cowboy story–and you had me at hilarious, smexy hero, and sexual innuendos.
I have added this one to my wish list over at Amazon.

Trish, It was reall good. Hero is super cute!

I love me some sexy cowboys! Thanks for the great review.

Thanks Joanne, definitely one of the good ones. ~Angela

Hello Angela and Under the Covers Book Blog,

Thank you so much for reading and reviewing my book. I’m thrilled that you enjoyed Amy and Kellan’s love story.

My pleasure.
Looking forward to reading more of the Sorentino sisters.
Thank you,
~Angela