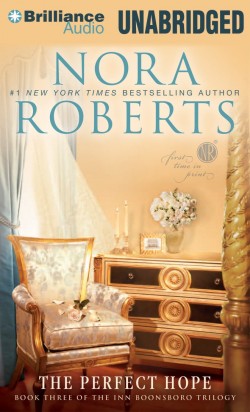 The Perfect Hope
by Nora Roberts

Roberts always delivers a romance that is worth checking out! ~ Under the Covers

In the last book of the Inns Boonsboro trilogy, America’s favorite author, Nora Roberts gifts readers with a sweet, sensual story of love and family.

Innkeeper, Hope Beaumont has found a new home at Inns Boonsboro where the staff has been more than accommodating, the community has been friendly and the owners –  well, one brother in particular – has been surly. But that doesn’t stop Hope from enjoying her time here.

As she continues to excel at their job, she comes face-to-face with Ryder Montgomery, the brother she kissed once at New Year’s. Their chemistry cannot be ignored because as much as Ryder and Hope try to pretend like nothing is happening, everyone else knows that it is only a matter of time before they realize it themselves.

THE PERFECT HOPE was a little slow at times. The plot really centered around Hope and Ryder and the development of their relationship. I noticed that there is a ton of dialogue in this book and hardly any descriptions. This, for me, is good in that you definitely get a feel of the characters and you feel like you know them personally. But at the same time, I missed the feeling of being in the inn, with its lavish descriptions and such.

The ghost, Lizzy had both good and bad times for me as well. At times I thought it was sweet that she was trying to protect and bring together Hope and Ryder, but also at the same time, it was a little freaky, especially when she started communicating.

All in all, it wasn’t my favorite of the series, but you cannot deny the fact that Roberts always delivers a romance that is worth checking out!

Thanks for the review! I was actually the opposite. Liked this one the best out of all 3 but this wasn’t my favorite trilogy. Too much Inn Building!

I think my fave is book 2. LOL Yes, there was a lot of details on the building.

I can’t wait to read this book. I’m on the waiting list at the library. I loved the last two. Thanks for the review.

I’m sad to see this series finished. I really enjoyed the first two books in the series, but haven’t read this one yet. Hope to soon. Thanks for the review.

This sounds good, will have a look at it.

I haven’t read this triology by Nora Roberts–and it sounds really good. I have been a long time fan of Roberts books, especially her trilogies. My fave has been her sisters in Ireland–what a wonderfully, talented, writer for sweet romance.