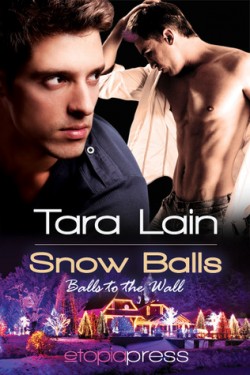 ” It got my attention from the very beginning and didn’t let me pull my ereader down.” ~Under the Covers

There is just something about this series that I always enjoy.  The characters and storylines are always fun.  They’re not long stories, but usually once I start them I can’t put them down until they are finished.  And SNOW BALLS was no different.  It got my attention from the very beginning and didn’t let me pull my ereader down.

A few reasons why…I thought JJ was adorable.  I just wanted him to be my friend and hand out with me.  His character was so conflicted because he’s a little…flaming, for lack of a better word.  All fluttering hands, giiiiiiiirl let me tell you about it, and into interior design. Works at the art gallery and on occasion likes to dye his hair pink.  Nothing much manly about him, except his size.  He’s built like a football player which is why the guys he’s with are always putting him in the dominant role of their relationship.  But he wants the opposite, someone to take care of him for a change.

So when Ryan Star shows up, a cop who just moved from New York, and sparks start flying, Ryan decides that he’ll pretend to be very macho to catch Ryan’s attention.

It goes to show that you should always be yourself, but also that thanks to that chance JJ took, he was able to find love and make a difference, not only in his life, but also Ryans’.

Ryan is the hero most women die to read about.  All bad ass cop, with some emotional issues and hang ups, the kind of tough guy you want to fix.  Except he’s so very interested in JJ even though he made it a rule not to play around with anyone in the vicinity of where he works.  See, he got put back in the closet after something bad happened back in New York.  And yes, there is just something way too hot about a guy in a uniform with guns.

Their relationship develops slowly and builds on their attraction and trust.  I thought they had great chemistry and complemented each other perfectly.  And don’t get me started on their physical chemistry because there were no problems in that department.

Now if I could only make one request……PLEASE GIVE JERRY A BOOK.  He needs one, he deserves one, I’m dying to read his HEA.

Oh, Francesca, you know when you rave about a certain M/M book, I’ll pay attention.
This one sounds fantastic, humorous, and smexy. It’s so going on my list.
Question–is this a book series that should be read in order? Let me know which to buy first, if so.
The title alone cracks me up.
Thanks for the review.

You don’t HAVE to read this series in order, but the characters do show up throughout the series, so you’ll get maybe some spoilers I would say if you read out of order. But they are sexy and funny and I seem to enjoy Tara Lain’s writing style in general (I started two other series by her which I liked also). Check out my reviews for THIS series here

Haha! That last sentence was exactly what I said in my review. If Tara Lain is reading them them, we should have her convinced. ;D

Love this series too. Nice review!

Hehe I actually thought this would be Jerry’s book when I bought it (cuz I don’t read blurbs LOL) so I’m more than ready for his book already. 🙂

thanks for the great review! Definitely going to have to give this one a look 🙂

Thanks for the great review Francesca!

Thanks for the review. Going to have to get this one.

Hope you girls enjoy it when you get to read it.

Thank you sooo much, Francesca, for reading the book and the series! I’m so delighted you’re enjoying them. I love writing my boys. Yes, Jerry will get his story soon! And i hope you liked my twins, Robin and Bobby, in Snow Balls because they will likely get a book too! Thank you again. : )

That is awesome news!!