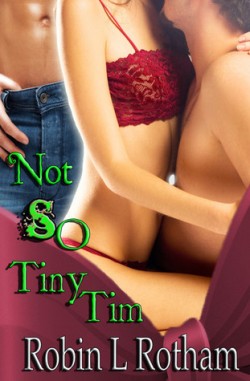 Not So Tiny Tim
by Robin L. Rotham

“This was another fun Christmas read.” ~Under the Covers

In the second of The Smutketeers Present: A Kinky Christmas Carol three story novella, we meet Tim Crichton, a video game entrepreneur who keeps his distance from love.  He’s not interested in any “forever’ scenarios and guards his heart accordingly.  Miranda Girard has loved Tim for what SEEMS like forever!  When she finally gets up the courage to show him how she feels, Tim puts on the brakes and Miranda is mortified.  When she runs into Tim’s temporary roommate and friend, Peter Vaughn, at a bar one night, they make a plan to stir some jealousy at their upcoming reunion dinner.  Little do they know that Tim’s resistance has worn thin and his feelings for both Miranda AND Peter are becoming difficult not to act upon.  Peter and Miranda have some serious chemistry of their own.  When the three of them get together, it’s anything goes!

Sounds fun! Thanks for the review 🙂

I haven’t read anything by this author yet but I am a smutkedette.
Z

This sounds like a really good s.s. Thanks for the review.

Jennifer, the title alone has me snickering, but your review got me really curious to read this. I’m gonna have to check this out just for the hell of it, lol.
Thanks for posting the review!