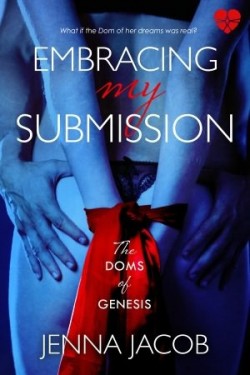 Embracing My Submission
by Jenna Jacob

Released: October 28, 2012
Series: The Doms of Genesis #1
Published by Self Published

“I was hooked by the roller-coaster of emotions I felt as I turned the pages.” ~Under the Covers

Julianna is a CPA by day, but a trained submissive known as Emerald by night.  She’s been hurt by a less than genuine Dom in the past and has longed to find her One, the Dom of her dreams.  For years, Julianna has been visited in her dreams by a mysterious Dom.  But he has yet to appear to her at her BDSM club, Genesis.  She’s grown frustrated and embarrassed that after years of looking, no one at Genesis has approached her with the intent to claim her as His own.   After a traumatic assault at the Club one night, Julianna is rescued by Mika, the veiled owner of Genesis.  She’s shocked to realize the Mika IS the Dom of her dreams, her fantasy come true.  But Mika has ghosts of his own that make giving his heart to another slave beyond what he can handle.   Julianna wants nothing more than to submit to Mika with her heart, soul, and body.  But in becoming not just a sub but a slave, will she loose her very self in the process?

This was my first work by Jenna Jacob and I was hooked by the roller-coaster of emotions I felt as I turned the pages.   I happen to love first person perspectives and the deep emotional connections they allow me to create with the main character.  This was no exception.  Julianna is a complex.  Despite years in the lifestyle, she has reservations about her ability to handle certain aspects of Master/slave relationships.  I really loved the genuine feel I got from her as a character, her hesitancy and uncertainty.  She’s a bit of a brat which I found endearing.  She’s no tame submissive.  The traumatic experience leading up to Julianna and Mika’s first encounter was difficult to read and I applaud the author’s acknowledgement of real Doms versus predators in the BDSM world.  Mika is wonderful: a big, beautiful Dom with an equally large heart.  He’s not a pushover, but one of the more gentle Doms I’ve read and I felt that’s just what Julianna needed.   The sex between the two is soooo hot it requires alone time to read.  Julianna is insatiable and Mika knows how to give her what she needs while maintaining complete control.  I think the secondary characters added so much to the book.  Mika’s father is a Dom in his own right and just oozes sex.  The Doms and subs at the club are intriguing and I’d like to see sequels around them.    For me the best BDSM books really delve into the psychology of submission, packing a big emotional punch and this one made me cry!  I want a Mika of my own!

Jennifer,
Since reading Cherise Sinclair’s Club Shadowlands series, I have a weakness for this genre. Love a well written and emotional story and your review convinced me to seek this book out.
Thanks for the post.

I have to read the books now! I have it on my PC and I kept looking at it then decided to read something else. I can’t do that again :))
Great review!

Thanks for the review! definitely adding to my want list 🙂

I might have missed this one if not for your review–thanks for introducing me to this book.

I LOVED this book….. I felt all the emotions the character felt all the way throught the book I laughed cried was happy and got Mad as Snot in some points….. best book ever I definitely suggest if you haven’t read it get it because it’s well worth it!!!!!

I loved this book! Jenna did a great job all the way around. You’ll never regret the read. A handful of tissues may be needed.

This book sounds fantastic. Can’t wait to read it. Thanks for the great review.

Thanks for the great review, have added this book to my TBR list.

This one looks really good. I love the cover.
Great review. I hope I win
Ezi

This sounds like a really good book, thanks for the review Jennifer!

This book is fantastic , I was glued to this book . I couldn’t put it down . I want more please ,I have read it twice . Thank You .

hey… I’m looking for this book online to download anyone know where i can download it for free or can u email it to me…….on nitikagoenka@hotmail.com