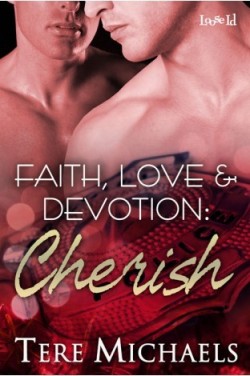 CHERISH is satisfying enough to sate the hunger that a lot of loyal fans are yearning for. ~ Under the Covers

Tere Michaels indulges readers by going back to back Evan and Matt. This time, it’s a short story, but CHERISH is satisfying enough to sate the hunger that a lot of loyal fans are yearning for. When Evan learns that Miranda, one of Evan’s teenage daughters is seeing a new guy and has plans to marry him at age twenty-one, he begins to worry and stress. Readers get a glimpse of the strong bond between Matt and Evan once again as they deal with whatever life throws at them. And even though Evan has moved on and but still loves Sherri, it doesn’t seem as if Miranda has moved past the death of her mother.

As Thanksgiving approaches, drama ensues when Evan asks Miranda, her new boyfriend and his parents to dine with them and their family. They deal with conflicting beliefs, angst, lingering grief and uninhibited passion.

What I liked about this conflict is the fact that it isn’t about Matt and Evan per se, but about the entire family that they have become. So even though I was only slightly disappointed when I found out they weren’t getting married yet, I didn’t hold on to those feelings for long. Evan and Matt already surpass that milestone even without the legal papers proving it. I think they demonstrate well how love is a measure of happiness. Their trust and loyalty in one another was satisfying enough for me. I do, however, have my fingers crossed that someday they will cement their love with marriage.

I also like how Evan still very much loves his wife even now, but accepts the fact that someone else is there for him now. It shows such growth in his character from where we see him in FAITH & FIDELITY.

Lastly, Michaels’s writing is always entertaining and fun. For such a short book, she is so readily able to turn on the charm. I love that about her writing. She had me smiling and laugh out loud with some of the lines and it only made me love the characters, and this book more!

This bio would be more interesting if I could fictionalize it...

I am an East Coast girl (Metro NYC to be exact), born and bred and with some slight princess traits. For example, "camping" is staying in a hotel without a pool.

Writing has always been my dream, my goal, the way my brain and my heart found a happy place. When I was five my mom got me a subscription to a Disney magazine and precocious early reader that I was, I immediately caught on to the fact that someone, indeed, WROTE these stories. That it was a real profession and from then I was locked in to what I wanted to do.

Of course it took me til just past my fortieth birthday to fully succeed by having my first novel, "Faith & Fidelity" published, but I've been writing for decades and whether or not I made a dime, it was always my "must do" thing.

In the meantime I've freelanced, worked in offices, managed a bookstore, lived in LA, starved and prospered and became a married mom in the 'burbs.

Right now my wonderful husband and my darling son and I live in a cute house in the NJ suburbs; we share our abode with three cats, a hamster and approximately 100 fish (warning: when the pet store says "they're all male!" don't believe them). Life is good and I am beyond grateful to my family and friends and fans who've brought me to this point.

I love to talk to people about writing and books and my book(s) so feel free to drop a line at teremichaelsblog @ gmail.com

Great review Ann, have this series on my TBR list, can’t wait to start reading.

Ann,
Woman–now this review makes me want to get 2 books, GAH! I must read the first before I tackle this short story.
But I love it when you get more than just the smexin in a story–and it sounds angsty and love the family dynamics that they (Evan and Matt) are dealing with–it sounds awesome and a little emotional, which is right up my alley.
Great review!

Tere is a new author for me. I can’t wait to read the Faith, Love, and Devotion series. It sounds fantastic. Thanks for the review.

I didn’t even know about this series until recently. I look forward to reading it. Nice review!

Thanks for the great review. The book sounds great v