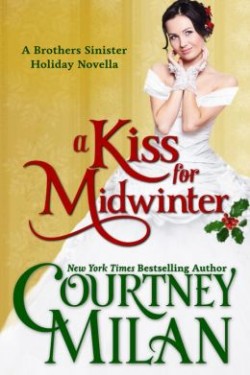 A Kiss for Midwinter
by Courtney Milan

“Courtney Milan blows me away every time!  A KISS FOR MIDWINTER was another great story by one of my favorite historical authors right now.” ~Under the Covers

This is the second Christmas themed short story I’ve read by Ms. Milan and I have to admit, she has a way to tell an engaging short story.  Of course, in this case I already knew the heroine of the book from reading THE DUCHESS WAR but I didn’t know about her past and what had happened to her.  All of which was only hinted at.

Miss Lydia Charingford got pregnant at a young age.  When her family brought her to the doctor, Doctor Jonas Grantham was there to learn and in the future take over the practice.  He didn’t say a word, which in Lydia’s mind was the same as him passing judgement on her the same as everyone else.

Now years later, Doctor Grantham comes back to Leicester and runs into Lydia.  And realizes that no other woman will do in his search for a wife.  It will be her and no one else.  But he won’t have an easy time at breaking down her walls.

Like I said, I already cared about Lydia from the first book, so she was easy to love and understand right away in this short story.  She’s managed to stay positive even after everything that has happened to her, which in those times would’ve meant complete and total ruin.  The shock of finding out why she lost the baby was also a big one.  That’s a lot of emotional things to deal with.  And in between all that she also has to deal with her own attraction and her body’s reaction to Doctor Grantham.

And I just LOVED Doctor Grantham.  He’s blunt.  My favorite kind of historical hero.  He told it like it was and never curbed his words out of a sense of what’s right and appropriate to talk about it.  It was just always about the truth, plain and simple.  Even when it didn’t come out quite right.

His caring side was definitely what Lydia needed as well and I think they make a perfect match. Even though Lydia is not the kick ass heroine I prefer to read about, she still has a spine and is not pushover.  She tries to see the good in everybody and the positive in any situation, but she is also a realist.

I guess my only complaint is that I wanted more!  Not that their story wasn’t told perfectly the way it was, but I’m greedy and I want more of Courtney’s writing.  Courtney Milan blows me away every time!  A KISS FOR MIDWINTER was another great story by one of my favorite historical authors right now.

I usually don’t read books with doctors, but this one sounds great! Thanks for the review 🙂

The doctor storyline I think was exactly what Courtney wanted to do reading her authors note. That was interesting to read about the research she put in for accuracy etc. hope you enjoy it Aly it’s only 0.99 😉

Thanks for the great review Francesca! I haven’t read any book by this author as yet but will definitely give her a try!

I hope you get a chance soon